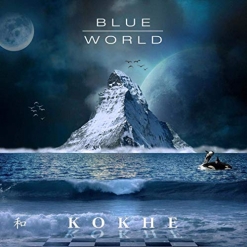 Kokhe's Artist Page on MainlyPiano
Album Links
Amazon (referral)iTunes
This site contains affiliate links to products. We may receive a commission for purchases made through these links.
Blue World
Kokhe
2019 / Eversound
60 minutes
Review by Michael Debbage
There is not a lot of information on the internet to fill in the blanks about what appears to be a new artist. But apparently this is only a new artist for the Eversound label as this Mexico born pianist released an album entitled Follow Your Heart over 15 years ago. As to what has occurred since then is not clear, but what is abundantly clear is the solid understated latest recording called Blue World from this rather unknown artist called Kokhe.

Clocking in at just under 60 minutes, Kokhe’s latest recording is minimalistic yet still memorable and somewhat melodic. With some of the songs rolling into the next track the level of musicianship and production will bring to mind the recordings of Liquid Mind. Kokhe is clearly influenced to a degree by the airy and flighty keyboards of Liquid Mind’s Chuck Wild with his non-obtrusive understated melodies that allows the listener to focus on relaxing and placing their heart beat and pulse to a slower beat as compared to life in the fast lane.

There are no standout songs on Blue World that focuses on an overall theme of pastoral and restoring music that will allow you to escape and recharge, ready to seize another day. Whether or not Kokhe’s music has a significant mainstream appeal doesn’t matter because if you are looking for an escape from the chaos, Blue World will leave you floating in an oceanic garden of your own personal dreamland.

November 21, 2019
Kokhe's Artist Page on MainlyPiano
Album Links
Amazon (referral)iTunes
This site contains affiliate links to products. We may receive a commission for purchases made through these links.