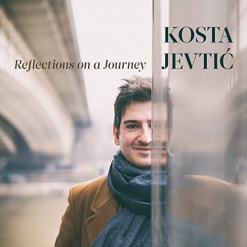 Kosta's Website Kosta's Artist Page on MainlyPiano
Album Links
Amazon (referral)iTunesSpotifyYouTube
This site contains affiliate links to products. We may receive a commission for purchases made through these links.
Reflections on a Journey
Kosta Jevtić
2020 / Mistyland
43 minutes
Review by Kathy Parsons
This year (2020), I’m hearing some of the best contemporary music I’ve heard since I started writing reviews twenty-two years ago. One of the best of the best is the debut album of Serbian composer/pianist Kosta Jevtić, Reflections on a Journey. A classically-trained pianist from childhood, Jevtić holds a Masters Degree in Piano Performance and was a “mainstream” classical musician who spent many years accompanying other musicians and teaching. Although he felt an affinity for composing from the time he was a child, Jevtić never let himself be immersed in it until his relationship to the piano changed in 2016. Allowing himself to be completely open and honest about the feelings within himself, Jevtić felt ready to communicate those feelings to his audiences. He played three of his original pieces in a concert in 2017, adding new compositions to his programs as he finished them. After a few years, Jevtić’s entire repertoire was made up of his own music. Several of the ten pieces on Reflections on a Journey are connected to his visits to Mediterranean countries, but this music is more representative of his inner world than of those actual places. There are plenty of excellent pianists in this world, but the combination of Jevtić’s mastery of the piano and his highly expressive and deeply emotional compositions puts him in an elite group of artists who can “do it all.” Although much of his music is melodic and serene, this is an album that absolutely needs to be listened to and savored, not simply heard in the background.

Reflections on a Journey begins with “Chiostro Del Paradiso,” a piece inspired by a 13th century Moorish-style cloister in Amalfi. Graceful, peaceful and tinged with melancholy, it’s a wonderful opening! “Sweet Sun of Southern Lands” is very dark despite the sunny title. The piece was born of the refugee crisis in Europe and is about the people whose sun was taken away from them - their mourning and longing will never go away. It’s an extremely powerful piece that becomes lighter near the end. The swirling energy of “Capri” reflects on the breathtaking view from the highest point on that island. The title of “Yr” refers to a specific type of rain in Scandinavia that looks like a cloud of cold steam carried by the wind over frozen woods. Because the raindrops are so tiny, you don’t get very wet. Very light and sparkling, Jevtić proves once again how well the piano describes many different kinds of rain. The dark and mysterious “Sappho’s Dream” is strongly atmospheric and clearly demonstrates Jevtić’s command of the piano as he moves through a full range of tonal colors. I love the rich harmonies and textures of “La Sirena” and the many images it brings to mind. Gentle and dreamy, “Procida” provides a lullaby for the soul. “Ischia” refers to a “magical” island, and is turbulent and stormy. “The Lighthouse” beautifully expresses feelings of isolation and loneliness as well as the beacon of light that prevents sailors from crashing into the rocks, and brings this incredible album to a close.

Reflections on a Journey is a truly exceptional musical experience and I highly recommend it! The album is available from Amazon and iTunes/Apple Music as well as many streaming sites such as Spotify. There are also quite a few videos of Kosta Jevtić performing on YouTube. I’m very excited about discovering Jevtić’s music and look forward to more in the near-future!

July 3, 2020
This review has been tagged as:
ClassicalDebut AlbumsKathy's Picks
Kosta's Website Kosta's Artist Page on MainlyPiano
Album Links
Amazon (referral)iTunesSpotifyYouTube
This site contains affiliate links to products. We may receive a commission for purchases made through these links.