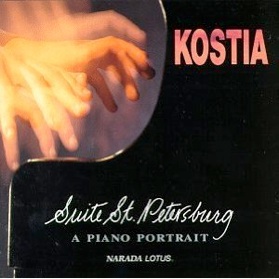 Kostia's Website Kostia's Artist Page on MainlyPiano
Album Links
Amazon (referral)iTunes
This site contains affiliate links to products. We may receive a commission for purchases made through these links.
Suite St. Petersburg
Kostia
1994 / Narada
44 minutes
Review by Kathy Parsons
Kostia’s Suite St. Petersburg is truly a classic album from Narada’s heyday in the mid-1990’s. Kostia recorded two solo albums of original music on the label and contributed to many of Narada’s compilations, and then he seemed to disappear. I had the pleasure of meeting and interviewing Kostia for my Pianotes newsletter in San Francisco in 1995, and was mesmerized by stories of his youth. Declared a prodigy by the age of four, Kostia was already composing music for piano and violin. At seven, he was enrolled in the music preparatory school of the Rimsky-Korsakov Conservatory. Even at that tender age, he was required to practice the piano for a minimum of four hours a day. As he got a little older, the practice time was increased to six or seven hours a day. Even a child with very modest musical abilities would shine with that amount of regular practice, so requiring that amount of dedication from an enormously gifted child yields astonishing results. Kostia graduated from the Rimsky-Korsakov Conservatory with a degree in piano performance in 1982 and then began the life of a touring musician. In 1989, a cultural exchange was arranged between the sister cities of St. Petersburg and Milwaukee, Wisconsin. Kostia agreed to compose music for the unveiling of a Russian mural in Milwaukee, planning to visit the US for two weeks during the festivities. However, Narada offered him a recording contract and he decided to stay. I’m hoping to do another interview with Kostia soon to fill in some missing pieces from the past twelve years or so.

Kostia’s compositions on Suite St. Petersburg have the elegant flow of an artist who feels the most comfortable in life with a good piano at his fingertips. Effortless and profoundly expressive, this music is pure magic, from the sweetly innocent “First Touch” to the effervescent “Winter Ride” to to the graceful lines of the piano and cello duet “Warm Stones” and the deeply evocative emotions of “Farewell.” If you missed Suite St. Petersburg when it was new, I can’t recommend this album enough. It will always be one of my favorite albums from any era. If you have a copy of this gem stashed away in the archives, give your ears a treat and fall in love with this music all over again! It is available from
March 13, 2012
This review has been tagged as:
Ageless FavoritesDebut Albums
Kostia's Website Kostia's Artist Page on MainlyPiano
Album Links
Amazon (referral)iTunes
This site contains affiliate links to products. We may receive a commission for purchases made through these links.
More reviews of Kostia albums 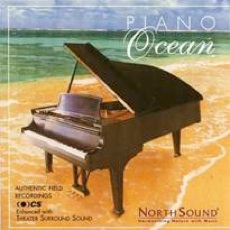