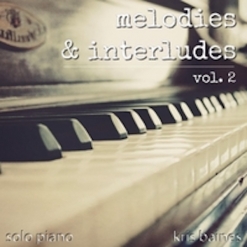 Kris' Website Kris' Artist Page on MainlyPiano
Album Links
Amazon (referral)iTunes
This site contains affiliate links to products. We may receive a commission for purchases made through these links.
Melodies & Interludes, Vol. 2
Kris Baines
2018 / Selah Recordings
45 minutes
Review by Kathy Parsons
I love pianist/composer Kris Baines’ first album of original compositions, but am simply blown away by Melodies & Interludes, Vol. 2 and the emotional range the music expresses. From light-hearted and joyful to the depths of sorrow, the seventeen piano solos are very personal and yet paint a vivid picture of what it means to be human. Although the pieces are a combination of melodic compositions and improvised film-score style interludes, it is difficult to tell the difference. The composed pieces have the free-flowing quality of improvisation and the improvisations hold together as well as more deliberately structured compositions. What is truly remarkable, though, is the expressiveness of the music. There have been a lot of truly great albums released this year, but this is one of the best.

In addition to being a pianist/composer, Kris Baines is a pastor, Bible teacher and the father of eight children. He is originally from the UK, but now lives in New Zealand with his wife and family. Earlier this year, Kris received national acclaim with his solo piano arrangement of New Zealand’s national anthem. The video of the performance was featured on prime-time national TV, gained over 40K views on Facebook and reached #2 on the Easy Listening charts.

Melodies & Interludes, Vol. 2 begins with “Me and My Piano,” which was released as the album’s first single. Light and carefree, it expresses the joy a pianist gets from playing the piano. “From the Rubble” is a tribute to those who died and served during the Christchurch earthquakes in 2010 and 2011. Baines was working as a paramedic at the time and “this composition goes back and forth between the unsettling rumbles of aftershocks, the deep emotion of loss and fear, and the hope-inspiring discovery of life during the many rescue attempts.” Baines uses tremolo in the deep bass of the piano to express the aftershocks, and the more melodic sections are kept simple and deeply heartfelt - an amazingly powerful piece and one of my favorites. I also really like “Waltz for Lilly,” which was composed in honor of Kris’ daughter’s puppy and the fun she brings to their family. I can really relate to this one! The lively and playful “A Day With You” is dedicated to Baines’ wife, Becky, and celebrate their love and friendship. "The Depths of My Heart” expresses emotions that cannot be put into words. Quiet but intense, it’s another favorite. “The Watchmaker” is a gorgeous and haunting tribute to Corrie ten-Boom and her family, who hid many Jewish people during WWII in The Netherlands. They saved many lives but were imprisoned for their efforts. Tender and very graceful, the piece expresses so much! “Gentle Persuasion” is another favorite. One of the interludes, it conveys its message with a soft-spoken intensity that I find compelling. “Memories In the Ballroom” has that dreamy, magical feeling that comes after an especially beautiful experience - love it! As a pastor, I’m sure Baines is often asked to listen to people’s stories of pain and tragedy, and the last four pieces on the album express some of those. “Please Come Home” is a musical cry for someone dear to return. “The Other Room (interlude)” is for the children who have to deal with parental conflict that occurs in “the other room.” “Tribute” is a heartfelt salute to those who have fought wars to preserve our freedom. “Final Words” tells of someone dealing with and coming to terms with a terminal illness, ending with hope and joy as the person is released and is no longer suffering.

September 28, 2018
This review has been tagged as:
Kathy's Favorites: 2018Kathy's Picks
Kris' Website Kris' Artist Page on MainlyPiano
Album Links
Amazon (referral)iTunes
This site contains affiliate links to products. We may receive a commission for purchases made through these links.
More reviews of Kris Baines albums 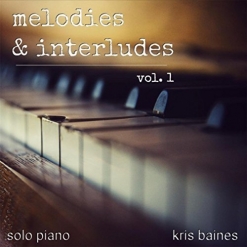 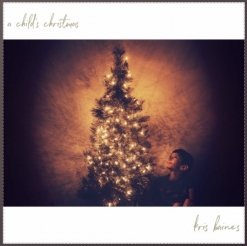