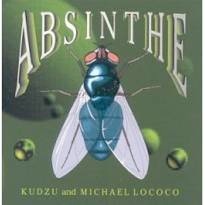 Kudzu and Lococo's Artist Page on MainlyPiano
Album Links
Amazon (referral)
This site contains affiliate links to products. We may receive a commission for purchases made through these links.
Absinthe
Kudzu and Michael Lococo
1999 / Treecastle Music
63 minutes
Review by Kathy Parsons
Kudzu’s name often appeared in Wind and Wire magazine as well as in the new age music newsgroup, but I only recently discovered his music first-hand. I’m hooked! This is not piano music per se, but keyboards are used extensively, creating the soundtrack to a film that exists only in the listener’s mind. Recordings like this could easily reignite the passion for sitting in a dark room and focusing on the music without distractions. At the very least, a listener will have to concentrate on the album a few times to really understand what is happening. It ain’t a pretty picture, but it sure gets the pulse pounding and the visual images flowing! It is music to be experienced and savored in all of its deep complexity, allowing your mind go where the musical images take it.

If you are not familiar with it, absinthe is a bright green drink made from the hallucinogenic extract from the wormwood plant, combined with anise. It was used extensively by artists and writers to enhance their creative vision (Oscar Wilde was a very prominent advocate), but is now banned in almost every country in the world. Even if absinthe were still available, this album would probably scare away anyone interested in experimenting with it. “Dancing With the Green Fairy” (Main Title Theme) opens the album with a mysterious and somewhat ominous feel - undoubtedly the preparation of the drink and consumption of it - temptation and seduction into a rapidly-changing mindstate. For the listener, this opening sequence is also compelling and seductive, drawing him or her in. Rhythms become more intense, as do the sound effects - we’re in for a real ride here! The hallucinations begin with “Night of the Circus” - these clowns are definitely evil, and the calliope is scary with its breathy and distorted piping. Each track conjures up new visual experiences as the absinthe effect intensifies, taking the listener deeper and darker, creating an incredibly powerful experience. “Unwanted Memories of a Music Box, a Funeral, and a Merry-Go-Round” indicates how disjointed things are becoming. “Oblivion” begins almost serenely with a catchy rhythm - the calm before the storm. Next come “Faces in the Woodwork” and the (Nightmare Sequence), “Visions Through the Third Eye” - some of the scariest music I’ve ever heard (and more than 17 minutes’ worth!). When the drinking glass is shattered amid the pounding rhythm of the nightmare, you just know this guy is totally enveloped in his darkest and most terrifying vision. What an exhilarating trip! It makes you want to return again and again for another fix!

Absinthe is another example of how broad the “new age” genre has become. This is not music to relax or unwind to, but is to be experienced for itself. It is about an intense as they come, and I thoroughly enjoy getting caught up in all of the visual images. Very highly recommended! It is available from www.amazon.com.
November 11, 1999
This review has been tagged as:
Kathy's Favorites: 2000
Kudzu and Lococo's Artist Page on MainlyPiano
Album Links
Amazon (referral)
This site contains affiliate links to products. We may receive a commission for purchases made through these links.