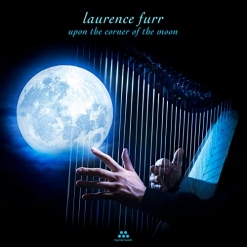 Laurence's Website Laurence's Artist Page on MainlyPiano
Album Links
Amazon (referral)Apple/iTunesSpotify
This site contains affiliate links to products. We may receive a commission for purchases made through these links.
Upon the Corner of the Moon
Laurence Furr
2021 / myndstream
47 minutes
Review by Kathy Parsons
Upon the Corner of the Moon is the second album from Celtic harpist and multi-instrumentalist Laurence Furr, following his 2020 debut, Deep Peace, also on the myndstream label. Dr. Furr's first album included a few pieces performed on Native American flute, but the thirteen improvised tracks on this one are peaceful solo Celtic harp bliss. Dr. Furr is a Certified Clinical Musician and Certified Therapeutic Harp Practitioner and works as a therapeutic musician at John Peter Smith Health Network in Texas. Quoting Laurence Furr: "Most of this music was improvised while playing at the hospital for staff, patients, and families. While I play, people, places, and events from my past and present fill my mind and the music comes pouring out onto the harp." All of the music on the album was composed, produced and performed by Dr. Furr, and Tom Eaton did the mastering. Warm, soothing and reassuring, Upon the Corner of the Moon is ideal for sleep, relaxation and meditation, but it's also wonderful for atmospheric background music and to listen to with full focus. There is plenty of substance in this music which can relieve stress and transport you to a place that is pain and worry-free.

Upon the Corner of the Moon begins with the title track, a piece that immediately calms and lifts you out of the troubles of the day. Traditionally, the harp is often equated with angels, and "Jacob's Stairway" is a very sweet and gentle piece of heaven. "Where Angels Tread" continues in a lighter-than-air style that's tinged with a feeling of reflection - gorgeous! "The Weight of Beauty" makes me think of watching a puffy white cloud floating by on a bright blue sky - weightless yet profound. "Genoveva's Dance" is very light, joyful and free - a piece that smiles with you as you listen to it! Although I have never seen a firefly "in person," the music of "Fireflies" paints a vivid, sparkling picture that expresses what it must feel like to be in their magical presence. "McDermott's Pub" has a dreamy, contented feeling about it. It has a lighthearted melody and enough reverb to give it a slightly otherworldly atmosphere. The melody for "She Handed Me Her Harp" is strong enough to support lyrics, but it's a lot more fun to imagine what the story behind the song and its title might be! I really like this one! Both light and nostalgic, "Green Fields of Ireland" has a traditional feeling that is beautiful and inviting - I really like this one, too! The closing piece, "Matthew's Heart," overflows with grace and affection - a loving tribute to someone special.

Upon the Corner of the Moon is a great second album from Laurence Furr, and I look forward to hearing more of his music in the future! It is available from myndstream.com, Amazon, Apple Music/iTunes, and streaming sites such as Spotify.
October 20, 2021
This review has been tagged as:
Other Solo Instruments
Laurence's Website Laurence's Artist Page on MainlyPiano
Album Links
Amazon (referral)Apple/iTunesSpotify
This site contains affiliate links to products. We may receive a commission for purchases made through these links.
More reviews of Laurence Furr albums 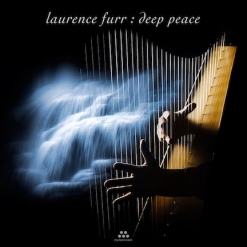