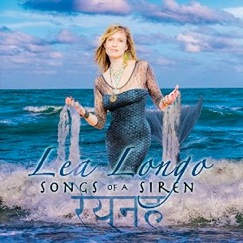 Lea's Website Lea's Artist Page on MainlyPiano
Album Links
Amazon (referral)iTunes
This site contains affiliate links to products. We may receive a commission for purchases made through these links.
Songs of a Siren
Lea Longo
2014 / Sweet Life Music
46 minutes
Review by Kathy Parsons
Lea Longo’s Songs of a Siren is a very interesting collection of original and cover love songs that mix smooth jazz vocals with Indian chants and mantras - and they actually sound like they belong together! Longo’s voice is warm, clear and soothing and, with the exception of a couple of uptempo songs, this is an easy album to relax with. Not a newcomer to the music industry, Longo has released several other albums and her music has been featured in major motion pictures as well as on television. In 2004, she won the National Songwriting Competition at the prestigious Canadian Music Week Festival in Toronto. In 2006, she traveled to India and discovered music mantras and chanting, working with some of the masters of the art. She is a certified Kundalini Yoga instructor and teaches mantra meditation to deepen her yoga practice and musical expression. These unique life experiences are reflected in Longo’s music and lyrics and her vocals are supported by drums and percussion, keyboards, guitar, bass, sitar, back-up vocalists, tabla, flute, and Fender Rhodes - quite an east-meets-west collaboration! I do wish the chants were translated to see how they relate to the songs themselves - a minor complaint.

Songs of a Siren begins with Lea Longo’s version of the Peggy Lee classic, “Fever.” Her slow, “chill” approach cools this torch song considerably and leaves me longing for the original - one of my all-time favorite vocals, so it’s hard to be fair with this one. Next is another standard, “The Very Thought of You,” which works better for me. The minimal accompaniment really puts Longo’s silky and often hypnotic voice front and center. “Love Is All You Need” is featured here and as a bonus track at the end. The first version is jazzy and upbeat with a mix of eastern and western instrumentation behind the lively and joyful vocals. “Here’s To Life” is the third of the three jazz cover tunes, and I like this one the best. Accompanied by gentle hand percussion and guitar, Longo’s voice is bittersweet and knowing. “Om Radha Krishnaya Namaha” is my favorite track. Without knowing how the chant translates, the longing in Longo’s voice expresses so much. “To Heaven” is a somewhat bigger production, with Longo’s voice altered so that it sounds like she is in the distance - haunting. The bonus track is a Ben Leinbach mix of “Love Is All You Need.” After an opening chant, sitar and tabla set a catchy, danceable rhythm that is full of infectious fun and happiness - a great way to end the album!

Songs of a Siren is quite a different as well as enjoyable listening experience! It is available from Amazon and iTunes. Check it out!
September 22, 2014
Lea's Website Lea's Artist Page on MainlyPiano
Album Links
Amazon (referral)iTunes
This site contains affiliate links to products. We may receive a commission for purchases made through these links.