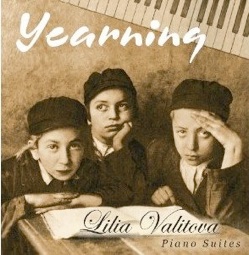 Lilia's Website Lilia's Artist Page on MainlyPiano
Album Links
iTunesAmazon (referral)
This site contains affiliate links to products. We may receive a commission for purchases made through these links.
Yearning
Lilia Valitova
2009 / Valitova Productions
73 minutes
Review by Kathy Parsons
Yearning is an extraordinary collection of thirty original piano solos based on or inspired by Jewish folk and liturgical melodies. The pieces were composed and performed by Lilia Valitova and are grouped into five suites. Each piece has a descriptive title, most of which deal with everyday events. These suites are part of Valitova’s attempt to understand the Shoah (Holocaust). Some of the melodies originated in Europe while others came from the Middle East. Most of the music is dark and melancholy, but several pieces are more lighthearted. All of the music is performed with an elegant touch and provides more than an hour of evocative music that can be savored on many levels. Ms. Valitova has dedicated the album to all people who are persecuted because of who they are.

Ms. Valitova earned her PhD at the Piotr Tchaikovski Conservatory in Moscow, where she also earned her graduate and undergraduate degrees. Her music has been performed in Russia, The United States, The Netherlands, Hungary, and Estonia, and she currently lives in Northern California where she continues to compose and perform. Not surprisingly, Valitova’s music is very classical in structure and style, and she imbues each note with deep expression and grace.

The cover artwork for this album has a sobering story. It was taken by Alter Kacyzne in 1919 in Poland and titled “Little boys with big ideas. Yeshiva boys studying Talmud on their own.” Kacyzne was murdered by Nazi collaborators during his attempt to escape from the invading German army. All of his manuscripts, photo negatives, and prints in Warsaw were destroyed. The cover photo and a few other photos survived because they had been sent to a Yiddish newspaper before the start of WWII. The three boys were thirteen when the photo was taken and would have been young adults at the beginning of the war. Their fates are unknown. Looking into the expressive eyes of these boys while listening to the music is haunting and poignantly explains the deep emotions of the music.

Lilia Valitova is a consummate artist, and her composing and playing are stunning. Yearning is available from www.valitova.com, Amazon, CD Baby, and iTunes. Very highly recommended!
April 30, 2010
Lilia's Website Lilia's Artist Page on MainlyPiano
Album Links
iTunesAmazon (referral)
This site contains affiliate links to products. We may receive a commission for purchases made through these links.