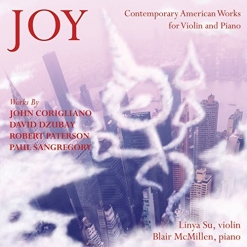 Linya's Website Linya's Artist Page on MainlyPiano Blair's Website Blair's Artist Page on MainlyPiano
Album Links
Amazon (referral)iTunesAmerican Modern Recordings
This site contains affiliate links to products. We may receive a commission for purchases made through these links.
Joy: Contemporary American Works for Violin and Piano
Linya Su and Blair McMillen
2016 / American Modern Recordings
67 minutes
Review by Kathy Parsons
Joy: Contemporary American Works for Violin and Piano is a collection of duets composed by Robert Paterson, John Corigliano, David Dzubay, and Paul SanGregory and performed by Linya Su (violin) and Blair McMillen (piano). All of the pieces were chosen by Linya Su and celebrate friendship and the spirit of the Empire State Building. Three of the compositions are four-movement works, so there are actually thirteen tracks. I really like Paterson’s “Sonata #1 for Violin and Piano” and most of John Corigliano’s “Sonata for Violin and Piano,” but the other two works were a bit of a struggle for me. I really enjoy the spirit and playfulness - and even humor - in some of Paterson’s music and look forward to hearing more of it in the near-future! I should probably mention that if you are looking for soothing, meditative music, some of this album is quite challenging. If you enjoy modern classical music, keep reading!

The artistry of the two performers is jaw-dropping. Linya Su is originally from Taiwan and currently resides in New York City. She made her concerto debut with the Taipei Symphony Orchestra a the age of 13 and was honored by the government of Taiwan as a gifted young musician of the year. She holds degrees from Indiana University, Lehman College, CUNY, and Teachers College, Columbia University. She performs internationally and is a devotee of arts, cultures, nature and humanities. Blair McMillen is an extremely versatile and sought-after pianist. He is a soloist, chamber musician, conductor and pedagogue. He is the pianist for the American Modern Ensemble, and performs with the six-piano group Grand Band and the Perspectives Ensemble. He has degrees from Oberlin College, Juilliard, and the Manhattan School of Music. He lives in NYC and has been on the music faculty at Bard College and Conservatory since 2005.

Joy begins with Robert Paterson’s “Sonata #1 for Violin and Piano” (2003). The first movement was composed in a Romantic style and is often melodic and flowing. Some passages make it clear that this is a modern composition, and in those passages, the interaction between the violin and piano is often fanciful. It is interesting that the movement ends abruptly with a sound much like the scratching of a needle on an LP. The second movement, “Schizando” (a word derived from “schizophrenia”), is a whirlwind of widely-varied themes that probably shouldn’t go together, but do, expressing a dizzying combination of moods, thoughts, and ideas. The third movement is slow and was inspired by the phrase “the weight of the past.” The piano keeps a fairly consistent beat with chords that seem to mark the passage of time. The violin part is somewhat freer, but is also heavier and more brooding - and quite beautiful. The main influences for the fourth movement are some of Stravinsky’s early ideas, folk-style fiddle playing, and jazz. I love this movement and its spirited, whimsical nature.

The second composition is John Corgiliano’s “Sonata for Violin and Piano” (1967), also a four-movement work. The “Allegro” is made up of lively dance motifs and constantly changing rhythms. The second movement is lyrical and graceful - a favorite! The third gives each artist a chance to solo. Dark and very dramatic, powerful emotions are vividly expressed. The fourth movement is a lighthearted and exuberant dialog between the two instruments and is one of the most joyful tracks on the album.

David Dzubay’s “Capriccio” is a loose set of variations with contrasting textures and moods. Originally composed for violinist Corey Cerovsek, the piece is built on a motif based on pitches derived from the letters of his name.

“Reverberation” (1995) by Paul SanGregory was composed during his doctoral studies and focuses on form and expression. The four short movements are titled “Reflectively,” Playfully,” “Expressively,” and “Energetically,” and the musical ideas are expressed with simple, direct communication.

Joy: Contemporary American Works for Violin and Piano is available from AmericanModernRecordings.com, Amazon, and iTunes.
May 13, 2017
This review has been tagged as:
ClassicalModern Classical
Contributing artists:
American Modern EnsembleRobert Paterson
Linya's Website Linya's Artist Page on MainlyPiano Blair's Website Blair's Artist Page on MainlyPiano
Album Links
Amazon (referral)iTunesAmerican Modern Recordings
This site contains affiliate links to products. We may receive a commission for purchases made through these links.