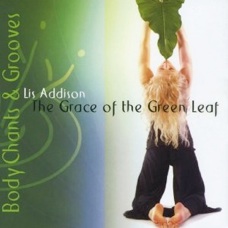 Lis' Website Lis' Artist Page on MainlyPiano
Album Links
Amazon (referral)iTunes
This site contains affiliate links to products. We may receive a commission for purchases made through these links.
The Grace of the Green Leaf: Body Chants and Grooves
Lis Addison
2010 / Lis Addison
49 minutes
Review by Kathy Parsons
The Grace of the Green Leaf is Lis Addison’s follow-up to her The Song of the Tree and Medicine Drum Kirtan CDs. An award-winning composer, vocalist, and dancer, Addison has been combining the three art forms to create groups of healing tones or vocal patterns which she sets to music. First were the Vocal Chakra Healing Tones (VoCHeT) on Song of the Tree, and now Body Chants (BoCha!) for this new album. Each of the seven tracks is focused on a specific part of the body - the base of the spine, the belly, the chest, the fingers and toes, the face, the sinuses and breathing, and the skin. “Body Chants act as focal points for meditation, healing, and ecstatic dance, so one can concentrate on these centers as the magnificent gifts they are.” (Quoted from the liner notes.)

Addison also creates choreography to her music for students of her sound/movement technique called KiVo: The Kinetic Voice. KiVo combines sound healing and chant with tribal dance, giving participants both an inner and an outer workout. Participants are encouraged to dance and sing to the music, which is a fun way to exercise the voice as well as the body. KiVo is designed to “clear the physical and energetic bodies in order to more fully receive and radiate the Spiritual Light.”

Addison holds a BA degree in Music Composition and Environmental Science and an MFA in Electronic Music from Mills College. She has written music for film, video, bands, solo performance, and the concert stage. She has been a vocal student of Nada Yoga and has studied eastern and western vocal and piano styles for more than forty years. She also has extensive training in ballet, modern, jazz, Kathak, and West African dance.

What is particularly interesting, at least for me, is that Addison has taken the ancient traditions of chant and tribal dance and set them to original contemporary music, making her approach fun and accessible to a broader group of people than using just chants and drums. Addison has a remarkable singing voice, and her rhythmic music is catchy and upbeat. To sit and listen to the chanting gets a little too repetitive, but this is music for a specific purpose and is certainly music to be active to. I used the CD for an exercycle workout, and found it invigorating. The rhythms are at a lively pace without being too fast and frantic.

The Grace of the Green Leaf is available from www.lisaddison.com, Amazon, iTunes, and CD Baby.
November 9, 2010
Lis' Website Lis' Artist Page on MainlyPiano
Album Links
Amazon (referral)iTunes
This site contains affiliate links to products. We may receive a commission for purchases made through these links.
More reviews of Lis Addison albums 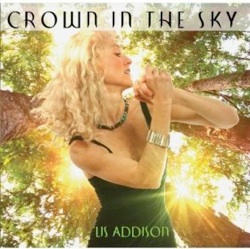