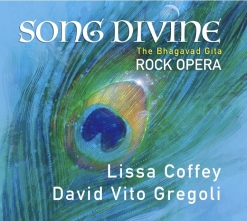 Lissa's Website Lissa's Artist Page on MainlyPiano Vito's Website Vito's Artist Page on MainlyPiano
Album Links
Amazon (referral)Lyric Book on AmazonApple/iTunesSpotify
This site contains affiliate links to products. We may receive a commission for purchases made through these links.
Song Divine: The Bhagavad Gita Rock Opera
Lissa Coffey and David Vito Gregoli
2021 / Dharmapala Records
123 minutes
Review by Kathy Parsons
More than three years in the making, Song Divine: The Bhagavad Gita Rock Opera is a monumental musical collaboration by best-selling author and songwriter Lissa Coffey and award-winning composer/producer/musician David Vito Gregoli. The Bhagavad Gita was written 5000 years ago and is considered to be one of the holy scriptures of Hinduism. Originally written in Sanskrit, its call for selfless action inspired many of the leaders of the Indian independence movement, including Mahatma Gandhi who referred to it as his "spiritual dictionary." The original Bhagavad Gita was created in song-form and was intended to be handed down through the generations, which it obviously has been. It is the second best-selling and second most-translated book in the world, after The Bible, but translations of the Bhagavad Gita into English resulted in the rhythms and rhyming of the original work to be lost. Also an authority on Ayurveda and relationships, Lissa Coffey decided to make the English translation more accessible to Westerners by putting the work back into verse and rhyme, as it was originally created. (Lissa is the founder of CoffeyTalk.com and often appears on national and local television programs.) Grammy winner Ricky Kej calls Song Divine: The Bhagavad Gita Rock Opera "Hamilton for the spiritually minded" and I'm sure that this incredible and deeply inspiring project is destined to become just as celebrated whether or not it is ever staged.

Song Divine: The Bhagavad Gita Rock Opera is a double album with eighteen songs (the same as the original Bhagavad Gita) plus a bonus track and a playing time of just over two hours. Each of the eighteen songs is based on a traditional Indian rag. The main "characters" in the story are Krishna (Deepak Ramapriyan) and Arjuna (Alexander Perez). On "Know Who You Are," Krishna is sung by Sonu Nigam, often referred to as "The Elvis Presley of India" and "The Justin Timberlake of India." There are a few guest artists, but David Vito Gregoli plays drums, fretless bass, synth, organ, piano, electric and acoustic guitars, sitar and Indian percussion. He also produced the album and provides backing vocals along with Kimberly Haynes.

The album begins with an introductory track narrated by Venu Bhanot that lays out the story of conflicts between two sets of cousins that are leading to war and introduces us to Arjuna and his friend and advisor, Krishna. One of the factors that makes this recording unique is the mix of western pop music styles and more traditional Indian music along with the instrumentation of each genre. Most of the vocals are very clear, but there is also a separate lyric book available that makes it easy to follow along and better understand the words of each song and their meanings. The music is powerful and emotionally-charged, but is not overbearing. Some of the songs are soulful ballads and some are more up-tempo toe-tappers, and I'm sure you'll be singing along in no time!

I have a lot of favorites in the nineteen tracks, but I especially like "Lotus In the Pond" with its catchy beat, Deepak Ramapriyan's lead vocals, Kimberly Haynes' backing vocals and Vito Gregoli's instrumentation. The bonus track at the end of the album is called "Maha Mantra" and is a more traditional Indian song with vocals by Visvambhar Seth and Venu Bhanot backed by acoustic guitars, mandolin, sitar and Indian percussion all played by Vito Gregoli.