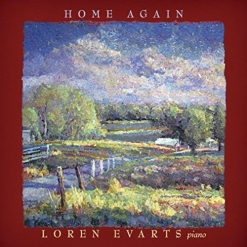 Loren's Website Loren's Artist Page on MainlyPiano
Album Links
Amazon (referral)iTunes
This site contains affiliate links to products. We may receive a commission for purchases made through these links.
Home Again
Loren Evarts
2018 / Otter Records
48 minutes
Review by Kathy Parsons
Home Again is the follow-up to Loren Evarts’ 2015 album, Water and Light. Like the earlier recording, Home Again features new arrangements of (four) older pieces and (eight) new compositions. Unlike Water and Light, Home Again is all solo piano (yea!!!). Produced by Will Ackerman with Tom Eaton at Ackerman’s Imaginary Road Studio in Vermont and engineered, mixed and mastered by Eaton, the overall tone of the album is warm and gently uplifting. A highly-trained and well-seasoned musician who has worn many musical hats, Evarts’ music is very melodic and easily-accessible and yet is just complex enough to reveal new things with each listen. Often inspired by being near bodies of water and/or books he’s read, Evarts’ music tells colorful stories without the use of words, leaving it to each listener to provide a plot and characters.

Home Again begins with “A Day on the Concord River,” a shortened tribute to a book by Henry David Thoreau. Peaceful and dappled with musical sunshine, the gently-rocking rhythm has a very pleasant hypnotic quality sure to calm the spirit. “Dugong Dance” refers to the “sea cows” of the Indian and western Pacific Oceans that are “cousins” to the manatees. The slow, fluid movement suggests the grace of these bulky marine creatures as they graze on sea grasses in shallow coastal waters. “Sunset Island” was first released on Evarts’ 1985 album, Water Music. Part of “St. John River Suite,” I love the warmth and stillness as well as the graceful ebb and flow of the rhythm of this beautiful piece. The title track expresses a lighthearted mood and feelings of contentment - sure to bring a smile! “Outermost House” refers to one of Evarts’ favorite books. Written by Henry Beston in the 1920’s, the book chronicles his year of living alone on the dunes of Cape Cod. Although the piece starts out very quietly and calmly, it becomes a bit darker and somewhat more intense in passages - my favorite track on the album. “Wedding at Sunrise” is joyful and celebratory. “Baker Lake” is also from Evarts’ “St. John River Suite” and beautifully describes the serenity of being near a body of water. It also describes the movement of the water and light sparkling and dancing on its surface. “Nine Mile Bridge” is also part of the Suite and is very soothing and evocative. The album closes with “The Good Life,” a piece that embraces simplicity and honesty while exuding warmth and calm.

If you appreciate fine solo piano music that is expressed without a lot of flash or bravado, Home Again is a must! It is available from Amazon, iTunes and CD Baby. Very highly recommended!
June 10, 2018
This review has been tagged as:
Kathy's Favorites: 2018Kathy's Picks
Loren's Website Loren's Artist Page on MainlyPiano
Album Links
Amazon (referral)iTunes
This site contains affiliate links to products. We may receive a commission for purchases made through these links.
More reviews of Loren Evarts albums 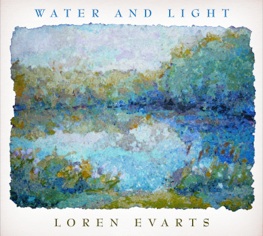