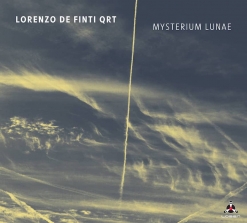 Lorenzo De Finti Quartet's Website Lorenzo De Finti Quartet's Artist Page on MainlyPiano
Album Links
Amazon (referral)Apple/iTunesSpotifyVideo
This site contains affiliate links to products. We may receive a commission for purchases made through these links.
Mysterium Lunae
Lorenzo De Finti Quartet
2022 / Losen Records
47 minutes
Review by Kathy Parsons
Mysterium Lunae by the Lorenzo De Finti Quartet is a fascinating and inspiring reflection on moments of brightness and beauty despite the darkness and difficulty of the past two years. The third studio album by the Italian jazz quartet, the group consists of Lorenzo De Finti on piano, Stephano Dall'Ora on bass, Alberto Mandarini on trumpet and flugelhorn, and Marco Castiglioni on drums - all stellar musicians with experience in a broad range of music genres. The six tracks were co-composed by De Finti and Dall'Ora and range from 6 1/2 minutes to almost ten, allowing plenty of time to explore the music, some of which is composed and some that is improvised. Quoting De Finti: "Ancient theologians created the metaphor ‘Mysterium Lunae’ (the mystery of the moon), to express how a cold, arid and barren object can mysteriously become a source of poignant beauty, as it reflects a bigger light, coming from somewhere else.”

I think it's significant to mention that a planned weekend in Switzerland for De Finti and his family at the beginning of the pandemic became a four-month odyssey until the quarantine rules allowed them to cross the border back into Italy and home. Again quoting De Finti, “When I finally made it back to my studio four months later, I found the computer was still turned on, open on the songs I was working on before leaving: it seemed to me like whispers from the end of the world.” When the quartet began work on the album, it was with an awareness that the world had changed. “We opened up our musical range, taking all our inspirations to the limit, more silences, more rock explosions, more electronics, more freedom.”

Mysterium Lunae begins with the title track, a piece the features shimmering piano, pizzicato (plucked) and bowed bass, soulful horns as well as energetic drums and percussion. The piece ranges from slow and reflective to bright and lively to a whispered sadness - all seamlessly woven together to create a wonderfully expressive study in contrasts. I'm not sure what "Mystery Clock" refers to, but I love the freedom of the piece as each musician explores a recurring theme from a variety of angles. "Whispers From the End of the World" is my favorite track on the album. It begins as a very slow, open piano solo that adds trumpet and bass in the first section. The piano takes the lead again at the beginning of the second theme, gradually brightening as drums and bass join in, taking turns with the lead. Trumpet joins in for the last couple of minutes, which are very lively and upbeat - almost celebratory - before returning to a more elegant and subdued style to the end. "Tiny Candle in the Storm (Shining on Us)" is another fascinating study in contrasts - from slow and melancholy, gradually building to almost euphoria and then gradually calming to the end. There is some amazing solo work in this piece! "Minuial Enni Arphent" begins as a duet for piano and bowed bass (sounding very much like a cello!), with all four musicians joining in after a couple of minutes, and the trumpet taking the lead. De Finti has a wonderful "cool jazz" solo in the middle of the piece and an otherworldly ending that just trails off. The closing track is a live studio version of "Mysterium Lunae" that gives it a slightly different flavor. There is also an exciting video for this piece!

Mysterium Lunae is a great introduction (for me, anyway) to Lorenzo De Finti, his quartet and his music. It is available to stream or download from Amazon and Apple Music/iTunes as well as streaming sites like Spotify. It will be available on vinyl on June 3, 2022.