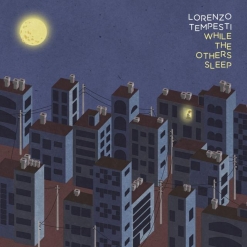 Lorenzo's Website Lorenzo's Artist Page on MainlyPiano
Album Links
Amazon (referral)iTunes
This site contains affiliate links to products. We may receive a commission for purchases made through these links.
While the Others Sleep
Lorenzo Tempesti
2016 / www.suonimusicaidee.it
52 minutes
Review by Kathy Parsons
While the Others Sleep is a piano-based album of sixteen original compositions by Italian soundtrack composer Lorenzo Tempesti. Tempesti has released several albums independently and has had his music included in compilations on the international label, Soundiva. The music on the album has strong classical influences, but Tempesti’s music is also influenced by contemporary composers such as Ludovico Einaudi, Fabrizio Paterlini and Vangelis. In addition to composing music, Tempesti is a music and Italian language teacher in state schools in Italy. He earned his Master’s Degree with honors in musicology from the University of Udine. He has taught in schools, training institutions, and music education institutions. He also co-founded the site www.musicologi.com and Musicologists Association, of which he was president from 2001 to 2007. He also collaborated in the research of restoration of sound recordings at the Mirage Laboratory of the University of Udine and then in the application of new technologies to learning music. With such a rich and varied background, it is no wonder that Tempesti is such a versatile composer!

While the Others Sleep begins with “Sospeso,” a gentle but very mysterious piece for piano and digital atmospheric sounds that bring a chill. “Bluesurka in A Minor” is a favorite. A bluesy mazurka in 3/4 time, piano, percussion and bass create a slinky jazz mood that really works! “Martial” is a very dark and ominous piano solo that is sometimes mournful and sometimes oppressively heavy - it’s not a happy piece! “Alla luna” is much dreamier and more graceful, gradually building to a peak and then quieting to the end. “The Light of Truth” begins very simply with space between many of the notes - almost like the music is asking a question. The tempo gradually gains momentum, becoming almost a lively, joyful dance. Near the end, the piece is played at the upper end of the piano and then resumes the dance with drama and excitement. “Eclair orange” is another favorite. Very melancholy and introspective, it’s a beautiful and poignant piano solo. “Geetha” feels like a sensuous slow dance or a romantic love song. “Giuseppe Ungaretti” is slow and solemn with a touch of mystery - very effective. I also really like “Linda’s Wave,” which starts slowly and simply, gradually adding a playful waltz rhythm and atmospheric background sounds. “Sole(Y)” is a very sweet and childlike piano solo that is played at the treble end of the piano and brings the album to a close with a smile.

While the Others Sleep should to much to introduce Lorenzo Tempesti’s music to the world. It is available from Amazon, iTunes, CD Baby, Deezer, and Spotify. Recommended!
February 19, 2017
Lorenzo's Website Lorenzo's Artist Page on MainlyPiano
Album Links
Amazon (referral)iTunes
This site contains affiliate links to products. We may receive a commission for purchases made through these links.