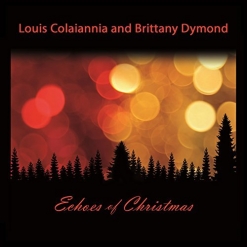 Louis and Brittany's Website Louis and Brittany's Artist Page on MainlyPiano
Album Links
Amazon (referral)iTunes
This site contains affiliate links to products. We may receive a commission for purchases made through these links.
Echoes of Christmas
Louis Colaiannia and Brittany Dymond
2016 / Louis Colaiannia
30 minutes
Review by Kathy Parsons
Echoes of Christmas by pianist/composer Louis Colaiannia and singer/songwriter Brittany Dymond is a collection of eight Christmas carols, six that are traditional and two originals created by Colaiannia. Four of the tracks are instrumentals and four feature the vocals of Dymond, who collaborated with Colaiannia on the single, “Special,” earlier this year. The other musicians include Bijoux Barbosa (bass), Danny Masters (guitar), Daniel Hogans (drums), Evelyn Gutenberg (flute), and Ike Spivak (sax). It is difficult to categorize this album into a specific genre (other than Christmas music), as Colaiannia’s jazz background is apparent on some tracks while others are a bit more new age or pop. Dymond’s vocals are light and delicate - sometimes almost fragile - and it sounds like she is probably smiling throughout the album (a very nice thing on a Christmas album!).

Echoes of Christmas begins with a piano and vocal arrangement of “The First Noel.” Dymond’s vocals are almost angelic on this simple and heartfelt arrangement which is part vocal and piano and part piano solo. “Winter’s Fire” first appeared on Colaiannia’s 2016 release Four Days In My Life, but this new version includes wordless vocals by Dymond and a different ensemble of backing musicians. “Winter Wonderland” is an upbeat and jazzy instrumental that will likely have you up and dancing - or will at least get those toes tapping! Dymond’s sweet and gentle voice is perfect for “Away In a Manger,” the first carol many of us learned as children. “Bethlehem Star” is the second original track, also an instrumental, that features most of the ensemble. “Silent Night” is again just piano and vocal, keeping it simple, expressive, and meaningful - my favorite track. “O Holy Night” is the only piano solo - a very beautiful arrangement and performance by Colaiannia. “Deck the Halls” is a bright and joyful duet for piano and voice, closing the album with a big smile and a happy giggle.

Echoes of Christmas is sure to brighten and enhance the spirit of the holidays and is available from Amazon and iTunes.

December 8, 2016
This review has been tagged as:
Holiday AlbumsHoliday Albums: 2016
Contributing artists:
Brittany DymondLouis Colaiannia
Louis and Brittany's Website Louis and Brittany's Artist Page on MainlyPiano
Album Links
Amazon (referral)iTunes
This site contains affiliate links to products. We may receive a commission for purchases made through these links.