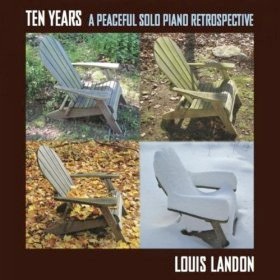 Louis' Website Louis' Artist Page on MainlyPiano
Album Links
Amazon (referral)iTunes
This site contains affiliate links to products. We may receive a commission for purchases made through these links.
Ten Years: A Peaceful Solo Piano Retrospective
Louis Landon
2013 / Landon Creative, Inc.
68 minutes
Review by Kathy Parsons
As the title explains, Ten Years: A Peaceful Solo Piano Retrospective is Louis Landon’s “Best Of” collection with favorites from his first six solo piano albums. (His first piano release, Unwind, was actually released in 2005, but who’s counting?) The sixteen tracks cover a broad emotional and musical range and appear in the order they were released, showing the evolution of a style as well as the person who created the music. Three of the tracks were re-recorded with updated arrangements for this album, reflecting how Landon plays them now. I have always really enjoyed Landon’s music, but think his last few albums have been stellar - especially last year’s Peaceful Solo Piano From the Heart. A lifelong professional musician with a strong background in literally all kinds of music from classical to jazz to pop and new age, Landon brings much experience to his original music and plays it with an effortless touch that can be magical. Whether he’s writing about his daughters, icicles, mermaids, joy, or emotional pain, his expressive playing goes deep and says so much.

The first three tracks come from Landon’s 2005 release, Unwind. “Peaceful” and “Freefalling” were both updated and “My Brooke” is in its original form. Peace Revolution was released in 2007, and “Skye’s Song” and “Camelot” (updated) come from that album. Next up was Solo Piano For Peace in 2009, and “Seattle Morning” and “Bittersweet” come from there. For me, a turning point came with 2010’s Solo Piano For Love, Peace, and Mermaids, which was inspired by Landon’s “Improvs For Peace,” a series of improvisations he recorded and posted on his website for free download for several years. Four pieces from that album grace Ten Years: “Heartbreak Ballet,” “I Found You,” “Siren,” and “A Lover’s Kiss” - all favorites of mine. I love the hypnotic “Siren”! Landon’s Peaceful Christmas (2011) is one of my favorite Christmas albums ever, and two of his originals from that album are included - “Family” and “Icicles” (another piece I dearly love). As I said, last year’s Peaceful Solo Piano From the Heart is my favorite of Landon’s albums, and the three pieces from that album are “My Joyous Soul,” “Twilight,” and “Faux Tango Fantasy” - all truly exceptional.

If you are new to Louis Landon’s music, Ten Years is a wonderful overview. Longtime fans will love having a highlights collection with new arrangements of three old favorites. Ten Years is available from louislandon.com, Amazon, iTunes, and CD Baby. Very highly recommended!
June 30, 2013
This review has been tagged as:
Kathy's Favorites: 2013
Louis' Website Louis' Artist Page on MainlyPiano
Album Links
Amazon (referral)iTunes
This site contains affiliate links to products. We may receive a commission for purchases made through these links.
More reviews of Louis Landon albums 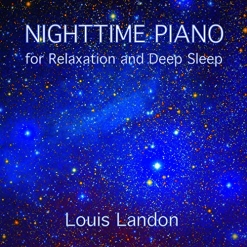