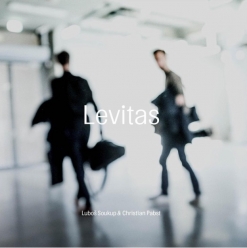 Lubos Soukup & Christian Pabst's Website Lubos Soukup & Christian Pabst's Artist Page on MainlyPiano
Album Links
Amazon (referral)Apple/iTunesSpotify
This site contains affiliate links to products. We may receive a commission for purchases made through these links.
Levitas
Lubos Soukup & Christian Pabst
2022 / Animal Music
42 minutes
Review by Kathy Parsons
Levitas is the third collaborative album by German pianist Christian Pabst and Czech saxophonist Lubos Soukup, but it is their first album as a duo. Primarily a jazz album, the music also incorporates elements of folk and classical music, creating a style that is rich and unique. The two musicians met in 2011 at the Rhythmic Music Conservatory in Copenhagen and have built their relationship around their mutual feelings of human understanding and musical synergy. Although they tour together on a regular basis, recording as a duo has been a longtime goal that has finally been realized. From beautiful, melodic ballads to more upbeat and experimental free-form jazz, the ten tracks on the album clearly demonstrate both artists' virtuosity as well as their versatility, creating a one-of-a-kind listening experience that deepens with each journey through the album.

Levitas begins with "Barcelona," a buoyant piece that opens with a sax solo that establishes the playful mood of the piece. The piano also gets a chance to solo in several places and the piece itself is obviously a tribute to a much-loved city! It's a great start! "Levitas I" is a short piece that feels very improvised and free. "The Red Sea" is more turbulent and experimental. Sometimes melodic and sometimes on the more chaotic side, it's fascinating from the first notes to the last! "Brasilian" is bright and rhythmic with a sultry, easy vibe that is positively infectious. "Snow" goes in an entirely different direction with a quiet, open feeling that suggests the peaceful beauty of snow falling silently to the ground and then sparkling as light dances on its surface. I really like this one! "Emma" is also on the slower, soulful side with some really beautiful playing from both musicians. It's the kind of piece that makes me think of someone alone at night playing perhaps by candlelight, just letting the music flow - also a favorite. "The House Above the Trees" is a very interesting title, and the piece itself is pretty wild! The piano is sometimes played with a hand or another object on the strings of the piano to create a more metallic, percussive sound. "Mesa" begins with the two instruments in a kind of dance - sometimes together and sometimes with each doing its own thing. There is an extended solo piano improvisation in the middle that is free and easy - another favorite! Like "Levitas I," "Levitas II" feels freely improvised and experimental. The album closes with "Storm," a piece that goes through many moods and changes - much like its namesake! From the build-up of dark clouds to the swirling winds that signal a coming storm to the pouring rain and winds that intensify as the storm lingers overhead, to the gradual calming as the storm passes, it is all vividly described in the universal language of music - a thrilling piece!