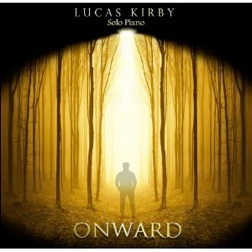 Lucas' Website Lucas' Artist Page on MainlyPiano
Album Links
Amazon (referral)iTunes"Bittersweet" VideoStories behind the songs
This site contains affiliate links to products. We may receive a commission for purchases made through these links.
Onward
Lucas Kirby
2012 / Lucas Kirby Music
55 minutes
Review by Kathy Parsons
Every once in a while a new artist comes along that you know is something really special. Lucas Kirby gives me that feeling in much the same way the late Dax Johnson did fifteen or so years ago. Ironically, both are/were from Spokane, Washington and both create(d) piano music that packs raw emotion into every note. The music on Onward, Kirby’s second CD, had me intrigued from the start, but when I went to Kirby’s website to learn more about him, I was blown away by his openness and candor in describing in detail where each of the fourteen tracks came from. As is true for most artists, life is a very emotional endeavor with extreme highs and lows, and it is often from these extremes that true art is created. What a powerhouse of an album and what a promising young artist we have here!

Onward begins with “Kamilya’s Theme,” a piece included in the upcoming film, College Debts. Inspired by a close friend, this graceful and expressive composition is a lovely opening and demonstrates Kirby’s tender side. “Clarity” began as a love song but was completed after the break-up of that relationship. Gentle but also searching and melancholy, it’s another beauty. “September” goes much darker, letting go of the past in preparation for moving into the future - not an easy transition, and the piece conveys the range of emotions experienced when making such a change. “From Within” resulted from a 4300-mile bicycle ride across the US and is much lighter and more carefree. “The Sound of His Insanity,” was inspired by Beethoven and Immortal Beloved, the film about Beethoven’s life. There are two versions of this piece on the album - the first is about 2 1/2 minutes and the second is an expanded almost five-minute version that includes some lighter moments along with the very dark and dramatic themes. An incredible expression of life’s difficulties, this is the piece that reminds me the most of Dax Johnson’s power and raw emotional energy. I have my fingers crossed for some sheet music for this one! “Dreams” began as a love song by the 13-year-old Kirby and has evolved over the years with sweet sincerity still ringing true. “Into the Abyss” arose from a period when Kirby was experiencing one huge loss after the next, each seeming more devastating than the last and culminating in feelings of utter hopelessness and depression. The naked, painful emotions are palpable, taking us inside the mind and heart of someone at rock bottom. Amazing! The return of a sense of hope and of moving on is celebrated in “Sincere.” “Masie’s Star,” an innocent and loving version of “Twinkle, Twinkle Little Star,” was composed for a sweet little girl who touched Kirby’s life. “Onward” is a soundtrack to picking up the pieces and starting over while overcoming fears and doubts, learning from life’s pain and difficulties. “The Bittersweet” was composed as a memorial to those who lost their lives at Sandy Hook Elementary School in December 2012 and as a comfort to those who must go on without them. Kirby also put together a wonderful video that includes the song on his YouTube station.

Onward is an incredible musical experience and one that has moved me profoundly. It is available from lucaskirbymusic.com, Amazon, iTunes, and CD Baby. I also recommend visiting Luke’s website to get the full stories behind this music. Very highly recommended!
February 10, 2013
Lucas' Website Lucas' Artist Page on MainlyPiano
Album Links
Amazon (referral)iTunes"Bittersweet" VideoStories behind the songs
This site contains affiliate links to products. We may receive a commission for purchases made through these links.