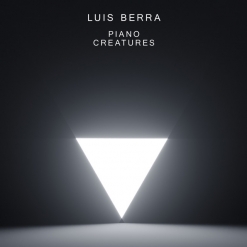 Luis' Artist Page on MainlyPiano
Album Links
iTunesSpotifyVideo for "Sleepwalking Deers"
This site contains affiliate links to products. We may receive a commission for purchases made through these links.
Piano Creatures
Luis Berra
2017 / 1631 Recordings
60 minutes
Review by Kathy Parsons
Piano Creatures is a fascinating collection of eleven original piano solos by Luis Berra, a pianist/composer who grew up in Italy and currently resides in Bavaria. Berra started piano lessons at the age of six and studied at the Music Conservatory in Sardinia for four years. He says that his father’s collection of phonograph records was also a big influence on his music education, introducing him to the music of Keith Jarrett, Bob Dylan, Paolo Conte, and Italian and American songwriters. In 2002, Berra was awarded a scholarship to attend his senior year of high school in Glenwood Springs, Colorado, where he discovered jazz, blues, and other forms of American music. He played the piano in restaurants on weekends, and when he returned to Florence, Italy the following year, he started playing in clubs, bars, and hotels while continuing his music education privately. Berra has been playing in luxury hotels in Italy and, more recently, in the Bavarian forest. In addition to composing, recording, and collaborating with other artists, he also performs concerts in theaters and music halls, and teaches privately.

Piano Creatures was recorded in the Bauer Studios in Ludwisburg, a studio that has worked with many major artists in many genres of music. The album was recorded on a Steinway D grand piano and the music is varied and beautifully played, demonstrating the wide range of influences on and inspirations for Berra’s composing style. Some of the music is melodic and flowing, while other pieces are more energetic, but there really isn’t a weak track on the album.

The album begins with “Sleepwalking Deers.” Light and dreamy with a playful streak, it’s a great opening! “Prelude for Claudia” is a beautiful, heartfelt tribute composed in memory of Berra’s mother who passed away in 2016 - one of my favorites. “Red Drops of Sunset” is darker and somewhat more free-form, again expressing very deep emotion - also a favorite. “Winter Birds Dance” has a graceful, flowing quality while conveying a feeling of icy cold. “The Crying Owl” is haunting, dramatic and spontaneous. “Between Two Winds” dances freely with a gentle energy that slows but never stops. I’d love to know the origin of the title to “Statues Don’t Sing Before Dark”! Rapid left hand broken chords and a dynamic right hand melody create an infectious, swirling energy. Several different themes tell an intriguing story without the need for words. “The Smiling Fox” is the most light-hearted and playful of the pieces on the album - and it sounds like the most fun to play! I love the changing rhythms in this one! “Where The Outsider Dreams” is another favorite. Sometimes poignant, sometimes dreamy, and sometimes joyful, it expresses so much! “From the Second Floor” is much quieter and more peaceful with a “less is more” kind of feeling. The lyrical quality of “Procreatrix” makes it a gentle “song without words” that brings this excellent album to a thoughtful and reflective close.

Piano Creatures is outstanding from the first note to the last and I look forward to hearing lots of new music from Luis Berra in the years to come! It is available from iTunes and Spotify. Highly recommended!
June 26, 2017
This review has been tagged as:
Kathy's Picks
Luis' Artist Page on MainlyPiano
Album Links
iTunesSpotifyVideo for "Sleepwalking Deers"
This site contains affiliate links to products. We may receive a commission for purchases made through these links.