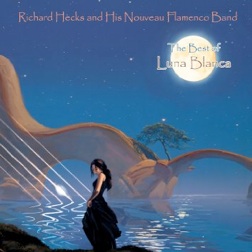 Luna Blanca's Website Luna Blanca's Artist Page on MainlyPiano
Album Links
Amazon (referral)iTunes
This site contains affiliate links to products. We may receive a commission for purchases made through these links.
The Best of Lunca Blanca
Luna Blanca
2015 / Richard Hecks
74 minutes
Review by Kathy Parsons
Who would have thought that a group of German musicians would rise to the top as one of the most popular nouveau-flamenco bands in the world? Guitarist Richard Hecks and company have done just that, and this Best Of Luna Blanca collection clearly demonstrates why. Beautiful, infectious, energetic, soaring, danceable, rhythmic, warm, peaceful, optimistic, and accessible are words I’ve used to describe this music in my reviews, and it is all that and more. This Best Of collection will take you on a musical adventure to places with brilliant blue skies, warm sandy beaches, plenty of time to relax, and friendly people to party with. You might also encounter a pirate, a singing mermaid, lost treasures, and a desperado as he goes down in a hail of gunfire.

Luna Blanca’s 2012 release, El Dorado, was the recipient of Zone Music Reporter’s “Best World Album” award for that year, and Pirates Bay was named as one of the “20 Favorite Albums of 2014” by MainlyPiano.com. The fifteen tracks on The Best Of Luna Blanca were selected from those two albums as well as Obsession (2012), Provence (2010) and Guitar Island (2006).

The primary musicians of the group are founder Richard Hecks (lead acoustic guitar) and Helmut Graebe (piano and organ), and this dynamic duo also composes most of the music for the band. Other musicians are added for performance as well as recording to create the sound they want and can include organ, rhythm guitar, bass, drums, percussion, occasional vocalizing, etc.

For joyful, life-loving music sure to make you feel good, you can’t do any better than Luna Blanca, so pour yourself a cool drink, find a comfy spot, and let the music transport you away from the stress and fast pace of daily life. Bon voyage! The Best of Luna Blanca is available from lunablancamusic.com, Amazon, iTunes and CD Baby. Very highly recommended!
April 26, 2015
Luna Blanca's Website Luna Blanca's Artist Page on MainlyPiano
Album Links
Amazon (referral)iTunes
This site contains affiliate links to products. We may receive a commission for purchases made through these links.
More reviews of Luna Blanca albums