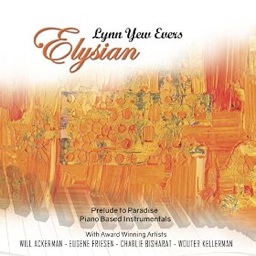 Lynn's Website Lynn's Artist Page on MainlyPiano
Album Links
Amazon (referral)iTunes
This site contains affiliate links to products. We may receive a commission for purchases made through these links.
Elysian
Lynn Yew Evers
2016 / Lynn Yew Evers
54 minutes
Review by Kathy Parsons
Elysian is the third full-length album from pianist/composer Lynn Yew Evers and her second collaboration with Will Ackerman (who produced) at his Imaginary Roads Studio in Vermont. Evers’ music is composed with a classical sensibility, but is expressed with a contemporary voice. Two of the thirteen tracks on Elysian are solo piano and the others are lightly orchestrated with some of the master musicians working in conjunction with Imaginary Roads Studio: Will Ackerman (guitar), Charlie Bisharat (violin), Tony Levin (NS), Eugene Friesen (cello), Jill Haley (English horn), Premik (sax), Wouter Kellerman (flute), Tom Eaton (bass), Jordan Buetow (alto recorder), and the haunting vocals of Noah Wilding. The CD includes a 15-page booklet with color photos and an explanation of the inspiration for each piece. It is no surprise that Elysian very recently won a Silver Medal from the Global Music Awards and I would expect that many more awards will follow for this lovely work of art. I would like to add that Ms Evers has performed twice in my house concert series and has one of the most graceful and elegant piano touches I have ever experienced.

A native of Malaysia, Evers started playing the piano at the age of 4 and began performing at 6, composing and improvising at 9. She earned a degree from the Trinity College of Music in London and then returned to Malaysia to perform, compose and arrange music, ultimately being invited to perform several times for the King and Queen of Malaysia. She relocated to Spokane, WA in 2009, along with her children and husband, Jeff. Elysian is the story of Evers’ journey of the past fifteen years.

The album begins and ends with “As the Train Leaves,” the story of the chance meeting of two people in a train station in Kuala Lumpur, Malaysia. The first version is arranged simply and soulfully as a trio for piano, English horn (Haley) and NS (Levin) - a heart-opening piece and a beautiful way to start. The closing version features Ackerman (guitar), Eaton (bass) and Wilding (vocals). “Remembering Love” is a tender tribute to a dear friend who passed in the winter of 2014 - piano with subtle bass enhancements (Eaton). “Shrouded Hope” is a favorite. A melancholy mood has rarely been expressed so beautifully! Featuring Wouter Kellerman on flute, Eugene Friesen on cello and Tom Eaton on bass in addition to the graceful piano, it’s an amazing and emotionally powerful piece. “Dream Chaser” is one of the two piano solos and reflects on the uncertainty of Evers’ dream. Gentle and questioning, it’s a gorgeous expression of a difficult time. “Blue Bird Day” is the vivid musical description of a perfect winter morning with fresh snow and a crystal blue sky - with Friesen and Jordan Buetow. “Enchanted Stroll” is a heartfelt song about contentment and features Evers, Friesen and Haley. My favorite track on the album is “Night Owl, In a Style of a Nocturne,” which features Evers, Bisharat, Eaton, and Wilding. A love song that begins in the evening and continues through the night during a storm, the story is told with a magical blending of musical voices.

Lynn Yew Evers is an extraordinary artist in the crowded field of contemporary pianist/composers. Fans of her previous recordings will fall in love with her music all over again. If you haven’t yet experienced her music, Elysian is a great place to start! It is sure to be on my Favorites for 2016 list! It is available from Amazon and iTunes. I give Elysian my highest recommendation!
April 2, 2016
This review has been tagged as:
Kathy's Picks
Lynn's Website Lynn's Artist Page on MainlyPiano
Album Links
Amazon (referral)iTunes
This site contains affiliate links to products. We may receive a commission for purchases made through these links.
More reviews of Lynn Yew Evers albums 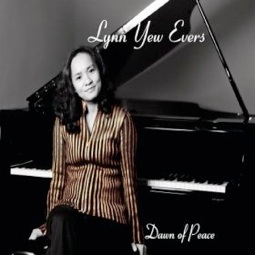 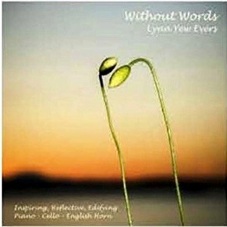