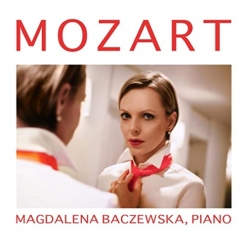 Magdalena's Website Magdalena's Artist Page on MainlyPiano
Album Links
Amazon (referral)Apple/iTunesSpotifyBach@Home
This site contains affiliate links to products. We may receive a commission for purchases made through these links.
Mozart
Magdalena Baczewska
2021 / Bluesleep
75 minutes
Review by Kathy Parsons
Mozart is a collection of solo piano works performed by Magdalena Baczewska (pronounced ba-CHEV-ska), an artist I am very excited about! The world has no shortage of recordings of Mozart's vast repertoire, but this album is different in a subtle but profound way. Ms Baczewska meticulously and flawlessly follows the scores of these well-worn musical chestnuts, but I have found myself often picturing Tom Hulce in Amadeus laughing, being silly, and refusing to take life too seriously. Obviously, many of the works on the album are lighter and some are even playful in spirit. Many are pieces that students learn in the course of their piano lessons, and I really appreciate this quote from Ms Baczewska, as I think it explains her approach:

"In this album I seek to explore the variety of dramatic gestures of Mozart’s music for solo keyboard. It would be impossible for me to think of instrumental music of Mozart without references to his operas. The slow movements often reflect the broad lyricism and vocality, bringing to mind the drama-filled arias Mozart wrote for his noble opera characters. On the other hand, there are countless gestures closely connected to the irreverence, and even slapstick humor of comic opera. Because the music possesses such extraordinary order and symmetry, one must listen with particular intent in order not to miss the nuances so cleverly and seamlessly integrated into the score.

"Finding the perfect marriage of the sound of the modern piano, larger-than-life operatic gestures, and the late 18th-century aesthetic, has been an enjoyable challenge.... I much enjoy looking for the balance in performing the repertoire written for early keyboards on the modern piano, in the context of not just the instrument, but also today’s musical tastes."

I think what comes through the most strongly on this recording is the expressive nature of Ms Baczewska's playing and her love of the music. Many of the recordings I've heard of Mozart's piano music have been rather dry, likely the result of much of the Classical era's focus on removing the emotional element from many of the arts. Ms Baczewska honors that tradition by not going overboard with emotional expression but still utilizing the much more colorful nature of today's pianos. I freely admit that I am not a die-hard classical-music-only person, and I love this approach to the music. I have never enjoyed a recording of Mozart's music more than this one!

Born in Poland, Magdalena Baczewska made her solo debut with the Silesian Philharmonic Orchestra at the age of 12. She holds Bachelor’s and Master’s degrees from Mannes College/ The New School for Music, and a Doctor of Musical Arts degree from Manhattan School of Music. She has performed internationally with the world’s leading orchestras: Philadelphia Orchestra, San Francisco Symphony, China National Symphony, Vancouver Symphony, and others. She is Professor of Music and Director of the Music Performance Program at Columbia University in New York. She also serves as Artistic Director of the Kosciuszko Foundation Chopin Piano Competition in New York. She is a recipient of the Outstanding Achievement Award from the Polish Minister of Culture and National Heritage for promoting Polish culture abroad. Her recordings include the best-selling Music For Dreams 1, 2 and 3 and she collaborated with composer/DJ Gene Pritsker on a remix of one of those albums in a crossover style mixing classical and chillhop. She also collaborated with Pritsker on Hip-Hopsichord, a five-movement piece for harpsichord and samplestra that combines harpsichord and electronic hip-hop/techno/r&b/drum and bass rhythms. She also has a series of videos called Bach@Home where she performs a variety of works and discusses the music and material pertaining to the music, composer, and/or performance.

Mozart is available from Amazon, Apple Music/iTunes and streaming sites such as Spotify. Magdalena Baczewska is a fascinating artist and I am really looking forward to exploring more of her music and videos. Very highly recommended!
June 21, 2021
This review has been tagged as:
ClassicalLatest Reviews
Magdalena's Website Magdalena's Artist Page on MainlyPiano
Album Links
Amazon (referral)Apple/iTunesSpotifyBach@Home
This site contains affiliate links to products. We may receive a commission for purchases made through these links.