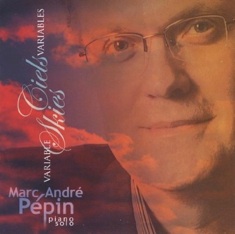 Marc-Andre's Website Marc-Andre's Artist Page on MainlyPiano
Album Links
Amazon (referral)iTunes
This site contains affiliate links to products. We may receive a commission for purchases made through these links.
Ciels Variables (Variable Skies)
Marc-Andre Pepin
2013 / Marc-Andre Pepin
42 minutes
Review by Kathy Parsons
Ciels Variables (Variable Skies) is the third solo piano album from Canadian composer/pianist Marc-Andre Pepin. Pepin started playing the piano at the age of eight and began composing music shortly thereafter. He went on to earn college degrees in both music and electrical engineering, and has professional careers in both music and science/engineering. Pepin’s music has very strong classical influences, as does his playing style, but his compositions are neither overly complicated nor too simple, giving listeners the option of having the music in the background or listening to it with more focused attention. Likened to brief movie scores, each of the twelve gems on this album has a story to tell in a language that everyone can understand if they only take the time to listen.

Ciels Variables (Variable Skies) begins with “Mardi gras,” a charming piece that demonstrates Pepin’s affection for ragtime (a love that I share!). In this case, the piece is in a more classic ragtime style akin to the early works of Scott Joplin - not the bolder and much more complicated styles that came later - a great way to start! “Difficile a dire (Hard to Express)” is composed as more of a song without words with a variety of themes that explore from several different angles. “Air d'autrefois (Spirit of Yesteryear)” has a very simple, nostalgic melody and an even simpler bass line, reminding us of less complicated times. “Journée d'enfer (Hellish Day)” is a minor-key waltz that feels slightly old-fashioned and melodramatic - fun despite the title! “Douces paroles (Soothing Words)” is a favorite. Deeply emotional and coming from the heart, it expresses so much with a minimum number of notes. “Pause-Café (Afternoon Tea)” all but dances right out of the CD player. Light-hearted with a twirling rhythm and a happy-go-lucky spirit, it’s a delight! “Raconte encore (Tell That to Me Once Again)” has a slightly Baroque flavor with its constant movement and flowing style. The title track has a slow, easy tempo and an expressive melody that ranges from dreamy and wistful to bolder and more dramatic. “Tête à tête (Heart to Heart)” closes the album with a lovely piece that feels like a heartfelt conversation that just trails off at the end.

Ciels Variables (Variable Skies) is a warm and very enjoyable listening experience! It is available from marcandrepepin.com, Amazon, iTunes and CD Baby. Recommended!
May 4, 2015
Marc-Andre's Website Marc-Andre's Artist Page on MainlyPiano
Album Links
Amazon (referral)iTunes
This site contains affiliate links to products. We may receive a commission for purchases made through these links.