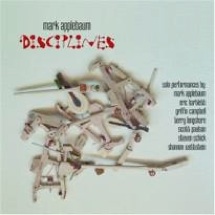 Mark's Website Mark's Artist Page on MainlyPiano
Album Links
Amazon (referral)iTunes
This site contains affiliate links to products. We may receive a commission for purchases made through these links.
Disciplines
Mark Applebaum
2004 / Innova Recordings
62 minutes
Review by Kathy Parsons
I recently reviewed The Applebaum Jazz Piano Duo’s “The Apple Doesn’t Fall Far From the Tree,” and thoroughly enjoyed it, so I was anxious to hear some of Mark Applebaum’s original experimental music. Disciplines is vastly different from the jazz album, and I found much of the music to be very puzzling. Innova Recordings always does an excellent job of providing enlightening information in their extensive liner notes, so I had high hopes of profound insight. Mark Applebaum wrote detailed explanations about the structure of the pieces and where his inspirations came from, but I found myself even more confused after reading the text. The obviously brilliant Dr. Applebaum is Assistant Professor of Composition and Theory at Stanford University, and is obviously doing revolutionary and groundbreaking work in contemporary classical music, but this music is so intellectual that it’s going to be beyond the reach of any casual listener (not the intended audience, I’m sure). I don’t consider myself a casual listener at all, but am in no way a music academic either, so I have had a really difficult time with this CD. I’m in ‘way over my head and know it - a humbling experience, actually.

Dr. Applebaum composed all of the music in this collection, but plays the piano on only one track, “Elegy,” which is also recorded on carillon by Scott Paulson. This piece (and several of the others) gives the performer many options, so I’m sure it is never played the same way twice. The other tracks are solo works composed for and recorded on cello, marimba, alto sax, and vibraphone. Pianist Shannon Wettstein is featured on the 24-minute suite of five pieces titled Disciplines. This is a fascinating album that I’m sure was created for highly intellectual music aficionados. I’m doubt that very many of them read my reviews, but I thought I’d give it a try anyway! Disciplines is available from innova.mu, amazon.com, and bn.com.
June 27, 2006
Mark's Website Mark's Artist Page on MainlyPiano
Album Links
Amazon (referral)iTunes
This site contains affiliate links to products. We may receive a commission for purchases made through these links.
More reviews of Mark Applebaum albums 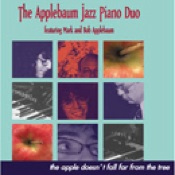