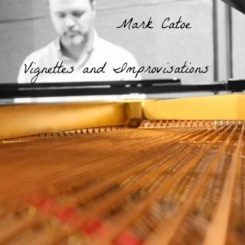 Mark's Website Mark's Artist Page on MainlyPiano
Album Links
Amazon (referral)iTunes
This site contains affiliate links to products. We may receive a commission for purchases made through these links.
Vignettes and Improvisations
Mark Catoe
2014 / Mark Catoe
45 minutes
Review by Kathy Parsons
Vignettes and Improvisations is the debut album by pianist/composer Mark Catoe. The project began as a creative challenge for Catoe to turn his wife’s name into a piano solo. Because of the constraints he placed on himself, Catoe found himself using a musical vocabulary he wouldn’t normally use. Having a lot of fun in the process, Catoe then set out to compose a piece based on a simple number. His next project was based on his grandfather’s CB handle and then a Kickstarter campaign was started where people could have their names or the names of loved ones encrypted within piano solos. The resulting album is a collection of seventeen piano solos, some of which were were improvised in the studio. Six pieces have titles and the eleven “Vignettes for Solo Piano” were each assigned a number, leaving it up to the listener to interpret what the music is about. The tracks range in length from just under two minutes to about 3 1/2 minutes, so they are all relatively short and concise. Some are more melodic than others, and most are on the peaceful side (a few are livelier and more playful), but all are accessible and very enjoyable.

Vignettes and Improvisations begins with “Journey’s Dawn,” a piece that blends the quiet calm of daybreak with the anticipation of venturing into the unknown - a lovely start! “The Winding Path” has an easy tempo that suggests the feeling of walking on a path where surprising beauty appears at every turn - and taking the time to savor it. “Quiet Repose” is a stress-melter with its slow, graceful melody and gentle deep-bass accompaniment - a favorite. “Vignette I” is quite different. Much more energetic and playful, it shows a different side of Catoe’s musicianship and is certain to bring a smile! Several of the Vignettes (tracks 6-16) show some influence from Erik Satie with their fluid ambience and gentle abstraction. “Vignette V” has a flowing left hand with an uncomplicated right hand melody that works especially well. “Vignette VI” is lighter and more carefree. “Vignette VIII” reminds me of Satie’s “Gymnopedies” although it isn’t an arrangement or imitation of the piece. The bass pattern is similar in places and the melody is simple and poignant - another favorite. “Vignette XI” is upbeat and energetic, overflowing with optimism. The album closes with the lyrical “Near or Far,” which feels very much like a love song - sweet and tender.

Vignettes and Improvisations is a very impressive first effort, and I look forward to hearing what else Mark Catoe has up his sleeves! It is available from Amazon, iTunes, and CD Baby. Recommended!
August 29, 2014
This review has been tagged as:
Debut Albums
Mark's Website Mark's Artist Page on MainlyPiano
Album Links
Amazon (referral)iTunes
This site contains affiliate links to products. We may receive a commission for purchases made through these links.