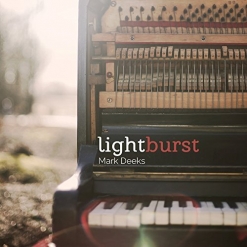 Mark's Website Mark's Artist Page on MainlyPiano
Album Links
Amazon (referral)iTunes
This site contains affiliate links to products. We may receive a commission for purchases made through these links.
Lightburst
Mark Deeks
2016 / Music Newcastle
42 minutes
Review by Kathy Parsons
Lightburst is the debut solo piano album by British pianist/composer Mark Deeks. Deeks has had a long and impressive career “playing other people’s music for other people,” but this album is a collection of nine beautiful original piano solos that reflect different aspects of nature’s light. The music is inspired by and steeped in the nature of the Northumbrian region of northern England and south-eastern Scotland Deeks calls home. The titles of the pieces are in the language of Old Northumbrian, but Deeks was kind enough to translate them for me. Overall, the music is very peaceful and meditative, creating a mood of quiet introspection that can easily turn into daydreaming while staring out a window (which I found myself doing repeatedly while writing this review!). The rhythms are gentle but keep the pieces gracefully moving forward. Several of the pieces brought to mind some of the more melodic works by Erik Satie - spare yet full of expression. I don’t know what kind of piano Deeks used for the recording but the sound is velvety-smooth and very rich yet can be percussive where appropriate. This is an amazing first album and I hope there will be many to follow!

Lightburst begins with “Lyg (Flame),” a piece that is both hypnotic and haunting. Slow and open, it seems to follow the delicate movements of a candle flame rather than a roaring fire. The title track (“Lechtblaest”) follows, picking up with the closing chords of “Lyg.” Moving at a very relaxed pace, this evocative piece has just over six minutes to tell its story. The first three minutes are played mostly in the lower half of the piano, creating a feeling of darkness. The second movement moves up the piano and gains speed and energy, becoming very dramatic and passionate and then calming to the end - definitely a favorite! “Uchta (Dusk)” is very hushed and peaceful with dramatic moments here and there - gorgeous! “Berrch (Bright)” has a repetitive left hand pattern that gently propels it while the right hand is very spare and sparkling. "Scymrrian (Shimmer)” is another favorite. A bit livelier, the left hand plays mostly gentle chords while the right hand is brighter and edgier - a fascinating composition! Ironically, “Sunnlic (Solar)” is quite dark and mysterious, but I really like it! The solemn and spare “Anaelan (Ignite)” begins with a series of slow chords. A melody gradually emerges and then returns to the chords which build to a peak and then soften considerably to the end of the piece and the end of the album.

Lightburst is a truly outstanding debut and is very likely to be on my list of Favorites for 2016. It is available from Amazon and iTunes. I give it my highest recommendation!

December 11, 2016
This review has been tagged as:
Debut AlbumsKathy's Favorites: 2016Kathy's Picks
Mark's Website Mark's Artist Page on MainlyPiano
Album Links
Amazon (referral)iTunes
This site contains affiliate links to products. We may receive a commission for purchases made through these links.