Mark's Website Mark's Artist Page on MainlyPiano
Album Links
Amazon (referral)iTunes
This site contains affiliate links to products. We may receive a commission for purchases made through these links.
The Diary
Mark Freshwater
2016 / Mark Freshwater
47 minutes
Review by Kathy Parsons
The Diary is the fifth solo album by pianist/composer Mark Freshwater. The fourteen tracks include eleven new original pieces and three arrangements. The instrumentation is mostly piano with keyboard and electronic instrumental enhancements. The album was given its title because when Freshwater was composing the music, he found himself repeatedly inspired by events in his family and from around the world. Freshwater is a classically-trained musician who grew up in a musical family that provided exposure to a wide variety of genres and styles. His music is sometimes very quiet and peaceful and at other times it is quite upbeat and fun, reflecting various influences and experiences in life as well as his music.

The Diary begins with Jim Brickman’s “Amalfi Rain.” Freshwater says he is always inspired by Brickman and almost always performs one of his pieces in concert, so he decided to start this album with his arraignment of a Brickman piece. Piano and strings carry the beautiful melody and express it with deep emotion. “Pilgrims Winter” conveys a bitter cold and great hardship, performed on piano with spare accompaniment. Dark and very poignant, it’s a favorite. “Spring Delights” suggests gentle breezes and the awakening of new life. “Babes In the New World” was inspired by the birth of Freshwater’s tenth grandchild and overflows with tenderness and wonder. This one is mostly solo piano - there are some synth strings near the end - and is another favorite. “Summer Interlude” is as lovely as a warm summer afternoon with nothing much to do but to relax and enjoy it. Very peaceful and contented! “65 Jive” is one of the fun songs I mentioned above. Hammond organ, strong percussion, piano and few other instruments harken back to some of the lively instrumental recordings from the mid-1960’s. Although it is quite different from the other tracks on the album, it fits in very well and adds variety. “The Journey” was composed in honor and in the memory of a relative who went through a grueling heart transplant and then passed away seven weeks later. As sad as the story is, the piece offers comfort and hope and is performed on harp, piano, and strings. “Elegy (Pour Les Francais)” expresses grief at the loss of life resulting from the terrorist attacks in Paris last year. Graceful and deeply heartfelt, it’s a wonderful memorial and a gorgeous piece played as a piano solo with subtle instrumental touches. “Mary, Did You Know?” is Freshwater’s instrumental arrangement of the haunting contemporary Christmas carol - another favorite. Freshwater ends his Diary with his arrangement of the hymn, “My Life Flows On In Endless Song,” a quiet and peaceful benediction.

The Diary is quite possibly Mark Freshwater’s best album to date. It is available from Amazon, iTunes, and CD Baby.
July 26, 2016
Mark's Website Mark's Artist Page on MainlyPiano
Album Links
Amazon (referral)iTunes
This site contains affiliate links to products. We may receive a commission for purchases made through these links.
More reviews of Mark Freshwater albums 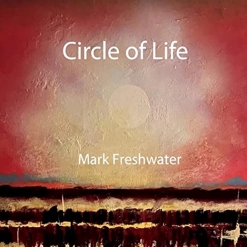