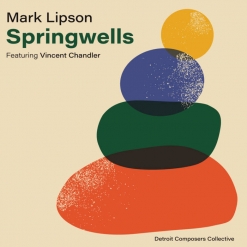 Mark's Website Mark's Artist Page on MainlyPiano
Album Links
Bandcamp
This site contains affiliate links to products. We may receive a commission for purchases made through these links.
Springwells
Mark Lipson
2022 / DCC Records
35 minutes
Review by Steve Yip
This was a new challenge for me to be introduced to a band and its music that I have absolutely zero familiarity with, but I thank Kathy Parsons for sending it my way via the Dr. Jazz Operations. I found this album to be quite interesting and eclectic in its jazz explorations. This is not a diss, but to emphasize its liveliness and diversity.

And as it is, these are seasoned musicians from the Detroit Composers Collective, Mark Lipson, producer, who also does nice percussions, with drummer Nate Winn. The notes by Jazz Times columnist Mark Stryker describe the crew as a “cross-section of...Detroit’s finest musicians.” Vincent Chandler is the featured trombonist who also composed three out of the six pieces, including the opening “Springwells.” Larry Fratengelo does an upright rhythmic support on percussion on several pieces; Rafael Statin on reeds; Cary Kocher on vibraphone; Jeff Pedraz on the upright bass; Gary Schunk on piano; Mark Lipson on percussion, and Nate Winn on drums.

The first piece, “Springwells,” is an upbeat Latin Jazz cruise (a borrowed expression) with Lipson and Fratengelo on great percussion. I don’t get its title, but the piece sprang to life immediately -- lively and joyous. “Copycat” had a big band feel with Larry Fratengelo kicking things up. While “I Remember Joe” opens with a multilayered kaleidoscope of sounds reminiscent of a Dixieland band, and transitions into straight-ahead jazz with muscular solos by the horns, vibraphone, and piano, and a strong backbeat - and then it ends!

When I first looked over the description that came with the album notes, what immediately caught my eye was its second number, “Leafar Village”. The notes made references to its musical kinship with Pharaoh Sanders’ "Karma" and John Coltrane’s "Om." While the centerpiece of "Karma" is the hypnotic “The Creator Has a Master Plan,” for me Leafar Village was more mindful of Sanders’ “Harvest Time,” or even “Upper and Lower Egypt” from Sanders’ Tauhid. Goodness, and wow, did I enjoy it! Truth be told, "Leafar Village" was much, much too brief as a barely three-minute piece. Great job, composer Rafael Statin, and I would encourage this as a possible prelude to a much more developed suite or concept album. Hint, hint.

May 11, 2022
This review has been tagged as:
JazzLatest Reviews
Mark's Website Mark's Artist Page on MainlyPiano
Album Links
Bandcamp
This site contains affiliate links to products. We may receive a commission for purchases made through these links.