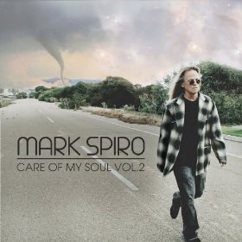 Mark's Website Mark's Artist Page on MainlyPiano
Album Links
Amazon (referral)iTunes
This site contains affiliate links to products. We may receive a commission for purchases made through these links.
Care of My Soul, Vol. 2
Mark Spiro
2012 / Sun Hill Production
45 minutes
Review by Michael Debbage
Despite a relatively low internet profile, Mark Spiro has released at least seven solo albums since 1994 the first being Care of My Soul. A blink of an eye and approximately 20 years later Sweden’s recording label Sun Hill Productions has not only re-mastered and re-released Care of My Soul with two bonus tracks but it is also the home for what appears to be Spiro’s eighth full circle recording Care of My Soul, Vol. 2.

If the artist’s name is not familiar to you it is very unlikely you have not already heard his songs if you are a fan of the likes of Julian Lennon, Cheap Trick, Bad English, John Waite, Heart, Giant and House Of Lords. These are just a few of the artists and bands that Spiro has collaborated with as a songwriter. Despite some musical divergence, a key ingredient associated with the above impressive list would be that their music is typically drenched in memorable melodic material which clearly translates over to Spiro’s discography. Needless to say Care of My Soul, Vol. 2 is classic Spiro solo material which starts off in grand style courtesy of the immediately gratifying opening song “A Beautiful Mistake”. A closer look at the lyrical content and you will see a very emotionally naked autobiography of an artist who has given up a lot of his own material for the sake of other artists.

Judging by the strength of his latest solo album it appears that Mark has decided to retain the best material for himself. Care of My Soul, Vol. 2 continues to flow effortlessly with the equally impressive follow up “Get Into The Going” which is another hook laden Spiro composition. It is a great soundtrack for you to just get in the car and flee the city for the open roads with your windows rolled down with this track blaring. Similar musical attributes can be found on “Starlight” and “Up In Flames”.

But not everything is upbeat with Mark more than capable of slowing it down and being a tad more reflective. The melancholy but never dreary mid tempo “Miss Her Everywhere” is a great counter moment. But the melancholy is evanescent on the verses of “Singing You Back To Me” which is countered by a powerful chorus reminding you that Mark Spiro is a way overlooked solo artist. Frankly with the exception of the lyric content “Love Don’t Come Around Here” there is very little not to like about Care of My Soul, Vol. 2.

With only two tracks that are given co credits, Mark Spiro once again composes, produces and performs Care of My Soul, Vol. 2. It is probably his most eclectic material since his debut solo album thus probably the driver for the title of the album. With the focus and spotlight being Mark Spiro the artist versus Mark Spiro the accommodating songwriter for others, Care of My Soul, Vol. 2 is lyrically intense and probably his most impressive recording to date.
May 26, 2014
This review has been tagged as:
Guitar music
Mark's Website Mark's Artist Page on MainlyPiano
Album Links
Amazon (referral)iTunes
This site contains affiliate links to products. We may receive a commission for purchases made through these links.