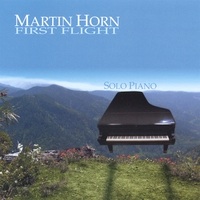 Martin's Website Martin's Artist Page on MainlyPiano
Album Links
iTunes
This site contains affiliate links to products. We may receive a commission for purchases made through these links.
First Flight
Martin Horn
2007 / Green On Blue Productions
68 minutes
Review by Kathy Parsons
First Flight is the debut CD of Oregon pianist/composer Martin Horn. Inspired by the beautiful countryside surrounding him, Horn writes, “The songs are a thank you note to my Creator for his creation and a hope for others to open their eyes and see the wondrous works of God.” Also a poet and guitarist, Horn brings a wealth of life experience to the piano, and his nimble fingers are quite expressive. The music was composed over a ten-year period. More classical than jazz or pop, Horn has also written lyrics for several of the songs, which are posted on his website (martinhornmusic.com). The pieces range from soft and gentle to bigger and more triumphant, from fairly simple to intricate and complex. The eleven piano solos range in length from four to nine minutes.

“Horizon’s Kiss” begins the CD. Twinkling and bright like light dancing on water, Horn’s fingers show us immediately that they know their way around the piano! The piece becomes calmer and then builds, suggesting perhaps the horizon at various times of the day. The title track begins slowly, with an interesting cross-handed melody in the bass that alternates into the upper registers of the piano. Graceful and effortless, it’s quite an effective piece. “Dancing in the Light” also makes me think of light reflecting in water, creating lively sparkles. “Angel Tears” is an interesting exploration that seems to include quite a bit of improvisation. Various themes merge and evolve, weaving an elaborate musical tapestry. “Child On the Summit” is a favorite. It flows with a gentle energy that suggests wonder and discovery. “Silver Creek Miracle” is a tour de force that runs all over the piano with a multitude of themes and rhythms, sometimes slow and elegant, sometimes rather rambunctious and playful. “Flooded Souls” has such a variety of themes that it almost sounds like a medley. Sometimes rhythmic and jazzy, sometimes serene, it seems to be telling a very complicated story. “Too Late At the Gate” is also complex thematically. The beginning is reflective and thoughtful, with changing rhythms and a very rubato style. As it develops, it becomes darker and more intense, sometimes sad or regretful; the ending is very dark, indeed.

“irst Flight is an interesting first release, and we’ll hope it will be less than ten years for Martin Horn’s “Second Flight.” It is available from martinhornmusic.com, cdbaby.com, amazon.com, and iTunes.
December 15, 2007
This review has been tagged as:
Debut Albums
Martin's Website Martin's Artist Page on MainlyPiano
Album Links
iTunes
This site contains affiliate links to products. We may receive a commission for purchases made through these links.