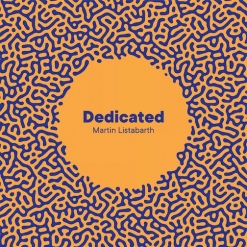 Martin's Website Martin's Artist Page on MainlyPiano
Album Links
Amazon (referral)Apple/iTunesSpotifyTuring's Pattern videoCalafati's Carousel video
This site contains affiliate links to products. We may receive a commission for purchases made through these links.
Dedicated
Martin Listabarth
2022 / Listabarth Records
48 minutes
Review by Kathy Parsons
Dedicated is the second solo piano album from Austrian pianist/composer Martin Listabarth. The ten tracks on this album are "dedicated" to ten of the people who have inspired and/or intrigued Listabarth at various times in his life. About the only generalization that can be made about the album is that Martin Listabarth can really play the piano! His music probably fits best into the jazz genre, but there are also very strong classical influences that give Listabarth a distinct and unique musical voice. The music ranges from slow and graceful to very upbeat and playful with a little bit of everything in between. Promotional material from Jazzfuel probably says it best:

"Musically, it’s a treasure trove of solo piano technique, running the full spectrum from soft and melancholic to dramatic and bold. Shimmering, classical-inspired ballads give way to blues-infused vamps and high-octane swing. The resulting collection of music is both playful and challenging, accessible yet complex –  something heightened by the narrative that inspires each song."

Listabarth explains in the liner notes who and what inspired each piece. The album opens with "Cholita Climbers" which is named for a group of women who climb some of the highest mountains in Latin America in traditional costumes. Specifically dedicated to Lydia Huayllas, the group has met a lot of resistance, but stood their ground to overcome the obstacles in their way. Sometimes delicate and almost fragile and sometimes much bolder and more assertive, it's a great opening piece! "Hercule Poirot" is dedicated to author Agatha Christie, who created his character. Poirot's "self-absorbed demeanour often turns out to be unintentionally funny." Lively and playful with a bluesy spirit, this is a really fun piece and one of my favorites. "Turing's Pattern" is dedicated to Alan Turing, a British logician, mathematician and cryptanalyst, who was instrumental in decrypting the secret Nazi code during the second world war. Listabarth hid musical codes in the music based on the date of Turing's death by suicide. Heartfelt emotion pours from every note of this beautiful piece - another favorite. "Fairy Tales and Myths" is dedicated to Michael Köhlmeier, a storyteller who has fascinated Listabarth since childhood. A wide variety of musical themes and motifs are woven together to reflect Köhlmeier's unique narrative style. "The Hand of God" is dedicated to Diego Maradona, "one of the best soccer players of all time. His dribbling skills and witty playfulness inspired me to write this piece of music." This very lively piece seems to express a feeling of fun as well as intense seriousness - not an easy combination to set to music, but Listabarth does it well! I love the mysterious feeling of "Nazca Lines," which is dedicated to mathematician and archeologist Maria Reiche. Sometimes delicate and shimmering, and sometimes almost mournful, it reminds me of Erik Satie in some places and is bluesy in others - a really fascinating piece that seamlessly weaves all of these elements together! It's also my favorite track on the album! "Calafati's Carousel" is dedicated to Basilio Calafati, a larger-than-life Viennese character who operated a merry-go-round in the 19th century (among other things!). The piece is fast, light-hearted and full of fun.

What an amazing album Dedicated is and what a great introduction to Martin Listabarth! I'm hooked and will be watching for more of his music! The album is available from Amazon, Apple Music/iTunes, and streaming sites like Spotify and Soundcloud. Very highly recommended!

March 4, 2022
This review has been tagged as:
Latest Reviews
Martin's Website Martin's Artist Page on MainlyPiano
Album Links
Amazon (referral)Apple/iTunesSpotifyTuring's Pattern videoCalafati's Carousel video
This site contains affiliate links to products. We may receive a commission for purchases made through these links.