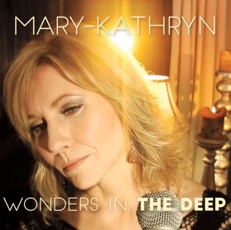 Mary-Kathryn's Website Mary-Kathryn's Artist Page on MainlyPiano
Album Links
Amazon (referral)iTunes
This site contains affiliate links to products. We may receive a commission for purchases made through these links.
Wonders in the Deep
Mary-Kathryn
2015 / Rhythm House Records
49 minutes
Review by Kathy Parsons
Wonders in the Deep is the fifth album from singer-songwriter Mary-Kathryn. The ten songs are all originals or co-written with Paul Buono (who also co-produced) and contain elements of pop, folk, and world music behind lyrics that are mostly religious/spiritual in nature. With themes of faith, trust, love, and prayer Mary-Kathryn takes us inside her own heart, sharing what she holds most dear. Her voice is the lead instrument in the ensemble, but guest artists include Buono on guitars, bass, keys, programming, and background vocals; Carl Albrecht on drums and percussion; Fergus Marsh on bass and Chapman stick; Mario Sangermano on stand-up bass; Dave McKay on piano; Benjamin Wolaver on cello; and Michael Lewandowski on mandolin. The instrumentation tends to be guitar-driven with some programming, and some tracks are rhythmic and upbeat while others more subtle and pensive. I really enjoyed listening to the album in the car with the volume cranked up, savoring the lyrics and letting their meaning soak in. I don’t listen to much vocal music anymore, so it was a very nice change of pace.

The a cappella beginning of “Hear My Cry” introduces us to the purity of Mary-Kathryn’s voice before the rhythmic percussion and guitars kick in. “Mediterranean Passage” is mostly an instrumental with wordless vocals, driving rhythms, and an earthy European feel. Mary-Kathryn calls “Elohim” the most personal of the ten tracks. Having been personally impacted by the film Slumdog Millionaire, Mary-Kathryn developed a “burden” for the oppressed peoples of the world. “Elohim” is a Hebrew name for God, and the song is a “heart’s cry” and “a prayer that God will minister to the needs of the oppressed.” Heartfelt and passionate, this is a powerful highlight of the album. Although I don’t quite understand what is happening in the lyrics, other than it’s a prayer from someone in profound trouble, “Where Can I Go” is a dramatic and emotional story told in less than five minutes - very powerful and poignant. “Into the Heavens” is something of a musical East meets West with lyrics that include “Dare to walk across the frozen tundra, forging through to find the signs of wonder ” - not words you hear very often and very haunting! “You’re With Me” is a peaceful and contented prayer of thanks that imbues the ending of the album with quiet warmth and optimism.

Wonders in the Deep crosses several musical genres and will touch the hearts of a wide audience. It is available from Amazon, iTunes, and CD Baby. Check it out!
June 19, 2015
Mary-Kathryn's Website Mary-Kathryn's Artist Page on MainlyPiano
Album Links
Amazon (referral)iTunes
This site contains affiliate links to products. We may receive a commission for purchases made through these links.