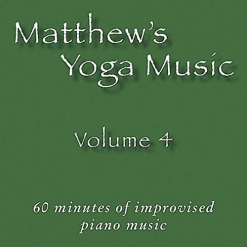 Matt's Website Matt's Artist Page on MainlyPiano
Album Links
Amazon (referral)iTunes
This site contains affiliate links to products. We may receive a commission for purchases made through these links.
Matthew's Yoga Music, Volume 4
Matt Johnson
2010 / Dolce & Nuit Productions
60 minutes
Review by Kathy Parsons
Matthew’s Yoga Music, Volume 4 is part of an eight-volume series of piano improvisations by Matt Johnson that is geared toward yoga, massage therapy, and/or “your own personal times of reflection and contemplation.” Each volume consists of four 15-minute segments, most of which are complex enough for focused listening as well as for background music and the purposes previously listed. The only sound added to the (digital) piano is “harmony ball texture,” which sounds like delicate wind chimes or tiny bells and creates a relaxing atmospheric effect as well as continuity when there are pauses in the music intended for yoga instructors to speak. My first impression of “yoga music” was that it would be mostly ambient, floaty and ethereal, but a variety of moods are expressed on each album and none of the albums sound like the others in the series (other than they are recorded with piano and harmony ball texture).

Matt Johnson is a classically-trained pianist who earned his Bachelor of Music degree in Piano Performance from Oklahoma Baptist University. As a graduate student at New England Conservatory of Music, he moved toward composition and received his Master of Music degree in Jazz Studies and Composition with a Distinction in Performance. He has performed extensively from Boston to Brazil and calls his original music “Neo-Romantic,” employing a unique blend of contemporary jazz, new age, popular and classical elements. He offers all of his music as free downloads from MattJohnsonMusic.com. Johnson is also a piano/music teacher and a church musician.

Track 1 on Matthew’s Yoga Music, Volume 4 begins with the harmony bell texture before the piano enters. This track is made up of interesting piano phrases of varying lengths followed by several seconds of the “wind chimes” tinkling quietly in the background. Some of the music gives the feeling of moving forward while other passages are more soothing and contemplative. Track 2 begins with a rhythmic pattern in the bass of the piano and a phrase on the right hand that evolves through a series of variations throughout the track. Track 3 is also built around a series of variations on a theme that have quiet pauses between them. Some of the variations have more momentum than others, but most are reflective and calm. Track 4 is the most emotional of the four tracks. Darker and more intense, it also has many open spaces between phrases of the music, which diffuses the emotional impact somewhat, but not in a negative way. The last segment of the piece is very dramatic and should bring you back into focus.

As I mentioned before, Matt Johnson offers all of his recordings and sheet music as free downloads from his website, MattJohnson.com. The recordings can also be purchased from Amazon, iTunes and CD Baby.

August 23, 2019
This review has been tagged as:
Kathy's Picks
Matt's Website Matt's Artist Page on MainlyPiano
Album Links
Amazon (referral)iTunes
This site contains affiliate links to products. We may receive a commission for purchases made through these links.
More reviews of Matt Johnson albums 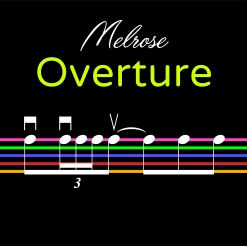 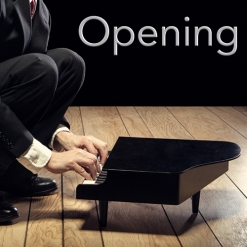 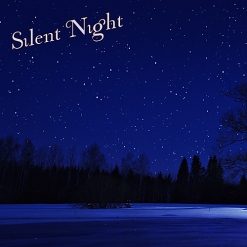