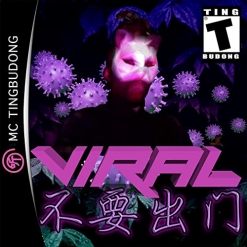 MC TingBuDong's Website MC TingBuDong's Artist Page on MainlyPiano
Album Links
Amazon (referral)Apple/iTunesSpotify
This site contains affiliate links to products. We may receive a commission for purchases made through these links.
Viral
MC TingBuDong
2021 / MC TingBuDong
21 minutes
Review by Steve Yip
This is most likely a much different musical journey. If one is musically and politically curious, check out VIRAL (不要出门) by the New York-based bilingual hip hop artist/political activist MC TingBuDong [听不懂, ”don’t understand”]. This African American artist raps in English and Mandarin Chinese! MC TingBuDong’s alter ego, JamNoPeanut, was formerly a Fulbright scholar who traveled to China over ten years ago to investigate and report on the hip hop scene there. For me, he has been a known political and social justice activist since 2009, but less familiar as a hip hop artist who has been collaborating within the Asian American hip hop scene.

VIRAL is “written as a conversation between China and Black America” and is produced in collaboration with artists across the Chinese and Asian American diaspora. The title tune "Viral" lays the themes that ‘we’re in this together’ referencing the coronavirus, the lockdown, and the racist scapegoating of Asian Americans. This is politically and socially conscious artmaking with an eclectic mixture of various sounds and resonations. For example, one number had what sounded to me like traditional Indonesian musical syncopation. Another number began and closed with a scratchy siren signaling an urgent political and social emergency. This work connects the dots for me like radical news flashes delivered in English and Mandarin. (Full disclosure: As an Asian American, this writer’s primary language is English. While he speaks some Cantonese Chinese, he definitely is NOT capable with Mandarin Chinese. So he’s been paying attention to the English lyrics!)

VIRAL draws from many early rap sensibilities that spotlighted blatant racial oppression, savage social inequality, and police brutality. "In Thru The Window," “somewhere in the jungle... you can find me down on Canal Street... you think you ‘woke’ but you are sleepwalking on the side street!” In "Ambition" the listener is informed that it's “time to give up your ambitions... it’s a rare time...and we have to stop wishing... get rid of this system is the mission...” "Ain’t How" makes the call to “Hold up..” that “in the age of apocalypse” we have two pandemics - covid and white supremacy. And settling with an exhortation that it’s “time to hit the streets... get out of the door! It’s a whole different world we are after..”

Released in December 2021, VIRAL is described as being “[t]old through six interactive musical experiences, it is a re-imagining of an era of pandemic and protest as a pirated video game sent from a revolutionary future.” Nuff said!

VIRAL is available from Amazon, Apple Music/iTunes and streaming sites such as Spotify.
June 7, 2022
Contributing artists:
Jamel Mims
MC TingBuDong's Website MC TingBuDong's Artist Page on MainlyPiano
Album Links
Amazon (referral)Apple/iTunesSpotify
This site contains affiliate links to products. We may receive a commission for purchases made through these links.