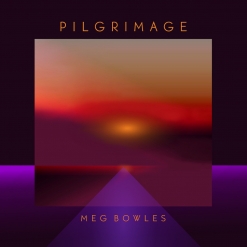 Meg's Website Meg's Artist Page on MainlyPiano
Album Links
Amazon (referral)Apple/iTunesSpotifyBandcamp
This site contains affiliate links to products. We may receive a commission for purchases made through these links.
Pilgrimage
Meg Bowles
2022 / Candlewood Digital
54 minutes
Review by Kathy Parsons
Pilgrimage is a six-track musical journey composed and performed by ambient/electronic artist Meg Bowles. Meg is an artist whose name I've been familiar with for many years, but I have to admit that this is the first album I've heard all the way through - several times! An artist who has worn many hats during the course of her career, Meg released her first two albums, Inner Space and Solstice Dreams, in 1993. She is a classically-trained flutist and completed formal studies in classical music performance at both Northwestern and Boston Universities. Realizing how difficult it would be to make a living as a classical flutist, she earned an MBA in finance from Columbia University in 1984 and worked as a derivatives trader for a number of years before leaving the field to pursue advanced studies in Jungian psychology and to create ambient electronic music. Meg released two more albums in the later 1990s before giving birth to her daughter in 2000. She resumed composing and recording ambient electronic music in 2011, winning a number of prestigious awards along the way. She is also a licensed psychoanalyst, choral singer, avid gardener, and local wildlife connoisseur!

Quoting Meg from the liner notes of Pilgrimage:

"A pilgrimage is a journey of inner transformation into the unknown, often made in solitude. For me, this is a metaphor for life. Walking the path can be immensely arduous and challenging. Nevertheless, many wonders accompany us in ways that subtly guide and sustain the soul, allowing us moments of beauty, joy, and grace. The healing balm of Nature—including the whole spectrum of meteorological phenomena that constantly dance in and out of our awareness—is a constant presence, grounding and holding and energizing us in ways that help us to continue on, to keep putting one foot in front of the other again and again. The soundscapes in this album evoke both earthly environments as well as dreamlike spaces not of this earth. Textural elements characteristic of both ambient music and space music are interwoven into a cinematic, orchestral style, creating a narrative arc that takes listeners up into vast, sweeping spaces as well as down into quiet, more intimate ones."

The six ambient tracks range from just under seven minutes to almost thirteen, so there is plenty of time for the music to captivate and draw the listener in. Each track tells its own story as part of the journey, and some of the music is dark and mysterious, some is very atmospheric and calming, and some is lighter and soothing. The titles themselves are very descriptive: "Ancient Paths," "Cave of Secrets," "Cloudburst Over a Parched Land," "Mountains Reaching for Stars," "Luminous Garden of Repose," and "Source of Enduring Light." Although they are seemingly specific, the titles and the music will mean different things to different people, depending on their own journeys through life. Having experienced quite a variety of different paths in her own life, it is no wonder that Meg Bowles bring such a rich and deeply rewarding expression to her original music. The album is a Pilgrimage well worth taking!

Pilgrimage is available from Amazon, Bandcamp, Apple Music/iTunes and streaming sites such as Spotify.

May 23, 2022
This review has been tagged as:
Latest Reviews
Meg's Website Meg's Artist Page on MainlyPiano
Album Links
Amazon (referral)Apple/iTunesSpotifyBandcamp
This site contains affiliate links to products. We may receive a commission for purchases made through these links.