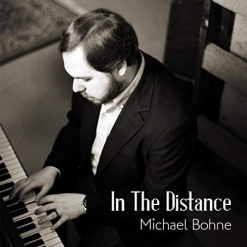 Michael's Website Michael's Artist Page on MainlyPiano
Album Links
Amazon (referral)iTunesCD Baby
This site contains affiliate links to products. We may receive a commission for purchases made through these links.
In The Distance
Michael Bohne
2018 / Michael Bohne
40 minutes
Review by Kathy Parsons
I was slightly unsettled to discover that I was reviewing two solo piano albums in two days based on the concept of what it would be like at the end of the world! In The Distance is the debut full-length album by Michael Bohne, who describes the idea for the album as: “A global, extinction level event is certain and close in time. Few will survive, those that do will slowly fade away. Developed under this focus, this concept album explores the thought of living your life haunted by the ticking of a clock in the aftermath of a horrible truth revealed.” As bleak as that sounds, much of the music suggests a sense of hope rather than despair, and while several of the eleven tracks are dark, some are not - possibly to express trying to carry on as normally as one can, even knowing the inevitable is near.

The album was recorded on a Chickering Anniversary Grand piano at Blue Sky Studios in New York. To quote Bohne: “The piano here has had a long life and I’ve embraced some of its current imperfections. It has given my recordings a slightly divergent sound that I think is fantastic, it complements In The Distance very well.” As much as I love the sound of a top-notch piano, the imperfections of some of these old workhorses add a distinctive voice and charm all their own.

In The Distance begins with the sound of a ticking clock (it sounds like an old one) along with rain and thunder, leading into “When the Time Comes,” a prelude of sorts that sets the dark and mysterious tone of the album. “Regarding Stonehenge” was composed after visiting the Stonehenge site in England, exploring the idea of the formation being a calendar and what it could reveal if its true intentions were known. Graceful and very melodic, this is one of my favorites. “Solar Flare” ups the energy level with passages that are almost joyful. “Never Looking Back” explores making difficult, defining choices and often expresses the sadness of having to make those decisions. Poignant and very beautiful, it’s another favorite. “Descent” begins in a very dark, bleak place with feelings of being lost and alone. The theme changes to a more optimistic tone and then alternates with the first theme - a very interesting and effective series of transitions! “The Wolves’ Den” is somber and weighty, as though the tragedy of what is coming is being fully realized. I like the changing themes as the piece progresses and the powerful, expressive beauty of those themes. Not surprisingly, “Fading Memories” has a very nostalgic feeling, but does not suggest despair or fear. “When the Stars Disappeared” begins with a slow, steady rhythm that creates feelings of foreboding and perhaps resignation. It brings to my mind that the worst has happened and it will be a short time before all is lost. The feelings of hope and optimism are all but gone.

Michael Bohne has created quite a fascinating story here, leaving the narrative to each listener’s interpretation. I can’t wait to hear what else he has in store for us! In The Distance is available from www.MichaelBohne.com, Amazon, iTunes and CD Baby. Recommended!

July 20, 2018
This review has been tagged as:
Debut AlbumsKathy's Favorites: 2018Kathy's Picks
Michael's Website Michael's Artist Page on MainlyPiano
Album Links
Amazon (referral)iTunesCD Baby
This site contains affiliate links to products. We may receive a commission for purchases made through these links.