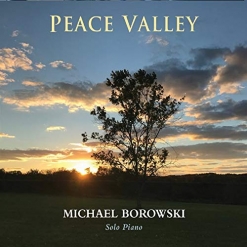 Michael's Website Michael's Artist Page on MainlyPiano
Album Links
Amazon (referral)Apple/iTunesSpotify
This site contains affiliate links to products. We may receive a commission for purchases made through these links.
Peace Valley
Michael Borowski
2020 / Michael Borowski
51 minutes
Review by Kathy Parsons
As its title suggests, Michael Borowski’s Peace Valley is twelve tracks of solo piano tranquility. Eleven of those tracks are original compositions, and the twelfth is an arrangement of Will Ackerman’s “The Bricklayer’s Beautiful Daughter.” The album was recorded at Imaginary Road Studios and was produced by Will Ackerman and Tom Eaton. Ackerman is quoted as saying: “I’ve known and produced a lot of piano players in my life .... as a producer I live for finding someone who doesn’t sound like anyone else. This is true of Michael. He’s a damned good player, but even more importantly, he puts his heart in everything he does. … one of the best…” No small praise from someone who has worked extensively with the likes of George Winston, Philip Aaberg and Liz Story, to name a few.

Michael Borowski was born in a suburb of Philadelphia, PA and is the son of a prominent piano teacher in that area. He started playing the piano at the age of four, and was inspired to start composing after seeing George Winston in concert when Michael was about 10. He studied music composition at Temple University and later toured nationally as a keyboard player in a number of bands.

Peace Valley begins with “Firefly,” a light, sparkling piece that dances gently and freely around the piano keyboard - a beautiful opener! The recurring main theme of “Finding Joy” has an almost hymn-like quality and then becomes somewhat more thoughtful and ambient. This isn’t a giddy kind of a joy, but a joy that lasts and sustains itself - an exceptional piece! “First Snow” begins with a flurry of notes that suggest the wind blowing snowflakes around before they settle on the ground. There is a hushed quality in the music that suggests the profound quiet that comes with a snowfall. The piece builds to more of a major snowstorm with lots of movement and excitement and then quiets to the end - gorgeous! “My Father, My Friend” is a warm and heartfelt tribute to a very special relationship and is another of my favorite tracks on the album. “Arches” picks up the tempo for a swirling and colorful “ode to joy.” “Dear Son,” has a strong lyrical quality that suggests that there might be words that go with the song. The title track is about as peaceful a piano piece as it can be. Very open, gentle and relaxed, it paints a beautiful picture in soft pastel colors and makes you want to be there. “7am Start” is another favorite. It begins in the bass half of the piano in a spare, ambient style, building gradually as the piece evolves, staying very ambient as it suggests the quiet stillness and solitude of an early morning. “The Bricklayer’s Beautiful Daughter” first appeared as a guitar solo on Will Ackerman’s 1981 album, Passage: Pieces for Guitar and also works beautifully as a piano solo. “Morning Cycle” could refer to a number of things from a bike ride to a routine of some kind, but the peaceful energy that propels it is serene and graceful, bringing the album to a contented close.

Peace Valley is a beautiful antidote to the stress and worry of 2020 and is available from www.MichaelBorowskiMusic.com, Amazon, Apple Music/iTunes and streaming sites like Spotify.

December 9, 2020
This review has been tagged as:
Debut Albums
Michael's Website Michael's Artist Page on MainlyPiano
Album Links
Amazon (referral)Apple/iTunesSpotify
This site contains affiliate links to products. We may receive a commission for purchases made through these links.