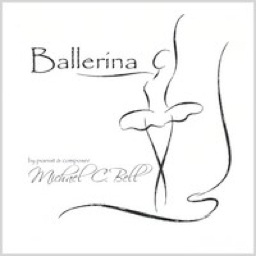 Michael's Website Michael's Artist Page on MainlyPiano
Album Links
iTunesAmazon (referral)
This site contains affiliate links to products. We may receive a commission for purchases made through these links.
Ballerina
Michael C. Bell
2006 / Michael C .Bell
54 minutes
Review by Kathy Parsons
Ballerina is the debut recording by pianist/composer Michael C. Bell. Originally released in 2006 as In The Stillness, Bell had the music professionally engineered and mastered in 2009 and re-released the album as Ballerina. The ten tracks include six piano solos and four orchestrations. The piano solos are quiet and intimate while the orchestrations have a more cinematic feeling to them and give the album an intriguing variety of sounds and styles. A mostly self-taught musician, Bell has been composing music since he was a youngster. His father gave him his only piano lesson and then turned him loose to discover the ins and outs of music on his own. A gentle, uplifting grace permeates all of the music, allowing the mind to drift while visualizing soothing images and colors.

“Lullaby” begins the set with a sweet and tender piano solo that invokes a relaxing sense of well-being. The title track comes next. Also a gentle and graceful piano solo, it makes it easy to visualize a solo ballerina dancing for her own enjoyment and personal expression. “Unspoken” is the first of the orchestrated pieces. Primarily strings and French horn, the piece is darkly mysterious, but not at all threatening or frightening - more like the anticipation of something unknown (or unspoken). This piece is definitely film soundtrack material! “Blue” is one of my favorites. Slow and bittersweet, this piano solo conveys the beauty of a reflective mood or subdued state of mind. “Hero” is strings with trumpet and flute, and has a sweeping sound that would be perfect in a film. Slow and regal, it’s a very inspiring piece. “Sadness Falls” is another favorite. Slow, intimate, and spontaneous, it’s not unlike a conversation between two people who are (or were) very close. “Adagio” is my favorite of the orchestrations. An elegant piece for a variety of string instruments, the mood is somber and introspective yet uplifting. Gorgeous! “Hope” is a gently reassuring and warmly optimistic solo. “Sedo” is the closing track and a piece for harp, clarinet, piano, flute, and strings. The first few bars remind me of a variation on “Canon in D,” but that impression doesn’t last long. A sparkling and light-hearted yet tranquil mood is beautifully conveyed, leaving the listener with a contented sigh.

Ballerina is a very impressive first album, and I hope there will be many more to come! It is available from michaelcbellmusic.com, Amazon, CD Baby, and iTunes. Recommended!
March 2, 2010
This review has been tagged as:
Debut Albums
Michael's Website Michael's Artist Page on MainlyPiano
Album Links
iTunesAmazon (referral)
This site contains affiliate links to products. We may receive a commission for purchases made through these links.