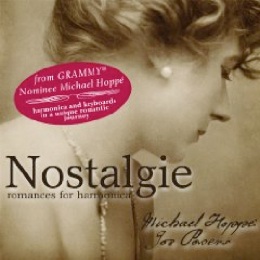 Michael's Website Michael's Artist Page on MainlyPiano Joe's Website Joe's Artist Page on MainlyPiano
Album Links
iTunesAmazon (referral)
This site contains affiliate links to products. We may receive a commission for purchases made through these links.
Nostalgie: Romances for Harmonica
Michael Hoppé and Joe Powers
2009 / Spring Hill Music
47 minutes
Review by Kathy Parsons
Nostalgie is a shimmering new work from Grammy-nominated pianist/composer Michael Hoppé, following in the tradition of Hoppé’s earlier The Yearning, The Poet, Romances for Solo Piano, and The Dreamer. If you are not familiar with those masterpieces, shame on you! All of those albums except Romances for Solo Piano are collaborations with Hoppé on piano and keyboard with flutist Tim Wheater (The Yearning and The Dreamer) and cellist Martin Tillman (The Poet) that include gorgeous booklets of photographic portraits taken by turn-of-the century photographer E.O. Hoppé, Michael’s grandfather. Those portraits were matched with each of the pieces of music and include biographies of those pictured or some of their poetry. Nostalgie is a collaboration with Joe Powers, a harmonica virtuoso, and this time the photos are matched to the music itself (only a few are portraits this time) with a brief note about each piece by Michael Hoppé. I was surprised to hear that Hoppé was working on a harmonica album since his music has such a strong classical influence, but from the first notes of the opening piece, you realize that this is no campfire harmonica player, but someone who thoroughly understands his instrument and has mastered it beyond all expectations. The melancholy character of Hoppé’s music is a perfect match to the harmonica’s mournful tone, making Nostalgie another masterpiece in this series.

“Prairie Moon” opens and closes the album, and is a new piece that has already gone through a series of incarnations. This first version is for harmonica and light orchestration, including guitar, and has a very strong “Americana” flavor. One senses vast open spaces and a sense of solitude. The closing “bonus” track is a more orchestrated arrangement on keyboards, which hints of Hoppé’s promise to have this music performed by a “real” orchestra for his next album. Yum! “Bella (for Bette)” is a stirring portrait of a close friend. With a bare minimum of notes, Hoppé and Powers say so much! “Melancholie” appears twice - once as a piano solo and again with piano and harmonica - both utterly poignant and graceful. “Vern’s Turn” first appeared on Romances for Solo Piano, and the addition of harmonica makes it an even more compelling tribute to a lost best friend. “Waiting For You” is classic Hoppé - quiet elegance with a strong feeling of nostalgia or longing. “Verdiana” was inspired by the music of Verdi, and appears once as a cello piece and later with violin (both without harmonica). “Tears and Roses” was originally composed for guitar, but then put away. Joe Powers makes this heartbreaker his own - an amazing beauty! “Sigh” is almost all harmonica with a minimum of string accompaniment - an outpouring of emotion and passion. “Coming Home” is an exquisite duet for harmonica and piano.

You might have noticed that I didn’t mention any favorite selections from this album. That’s because they are all so beautiful that it’s impossible to choose. Michael Hoppé has been one of my favorite artists since I fell in love with The Yearning more than twelve years ago. He continues to explore different avenues for his music while keeping the quality at an amazing level. Nostalgie is sure to be on many Top 10 lists for 2009, including my own, and I can’t recommend it enough. It is available from Amazon.com and iTunes.
September 4, 2009
This review has been tagged as:
Kathy's Favorites: 2009
Michael's Website Michael's Artist Page on MainlyPiano Joe's Website Joe's Artist Page on MainlyPiano
Album Links
iTunesAmazon (referral)
This site contains affiliate links to products. We may receive a commission for purchases made through these links.
More reviews of Michael Hoppé albums 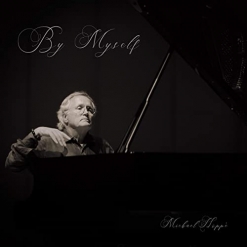 By Myself
2021
Latest Reviews 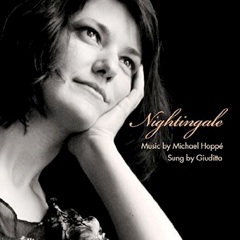