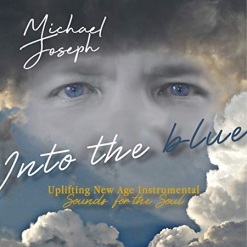 Michael's Website Michael's Artist Page on MainlyPiano
Album Links
Amazon (referral)iTunes
This site contains affiliate links to products. We may receive a commission for purchases made through these links.
Into the Blue
Michael Joseph
2019 / Michael Joseph Music
63 minutes
Review by Kathy Parsons
Into the Blue is the debut album from pianist/composer Michael Joseph. Several years ago, the longtime music arranger mentioned to his wife that he wished he could compose music. She asked him if he’d ever tried for more than ten minutes and encouraged him to sit at the piano for two hours and challenge himself. About an hour later, a composer was born. “Awakened” was his first piece and he released it as a single in 2015. It was included in the compilation, Sounds From the Circle VII, and a newer version opens Into the Blue. The thirteen original compositions on the album are piano-based and most are lightly orchestrated.

Michael Joseph was born and raised in Pittsburgh, PA and still lives there. He started playing the piano at the age of six and was classically-trained for twelve years. He also learned to play clarinet and bass, and developed a lifelong connection to Eastern European folk music, learning to play several of the folk instruments indigenous to the countries of that region. Some of those influences can be heard in his original music as well.

Into the Blue opens with “Awakened,” a piece that begins as a lighthearted (digital) piano solo that adds more instrumental voices as it unfolds and becomes livelier and more dance-like. “Carpathian Echoes” is based on chord progressions used in the folk music of the Carpatho-Rusyn people of Eastern Europe. Guitar and other stringed instruments beautifully carry the poignant, bittersweet melody. The title for the album and the title tune were inspired by the adage that the eyes are the gateway to the soul and the fact that Michael Joseph has blue eyes. The song has the piano in the lead most of the time, but is also orchestrated with strings, percussion and other symphonic instruments. “Daybreak” is buoyant and full of the promise of a new day. “Church of My Heart” begins with the sound of church bells that can occasionally be heard throughout the piece along with choir voices, piano and other instruments. “The Quiet Within” is a favorite. Not all that quiet or peaceful, the lively rhythm and poignant, flowing melody create a warm and soothing vibe that won’t likely put you to sleep. Piano, harpsichord flutes and strings are the main instrumentation. “Escape” is another favorite. It begins slowly with the piano playing the primary melody, which is sweetly melancholy. From there, it takes on a more Middle-Eastern sound with distinctive rhythms and ethnic instrumentation. At the mid-point of the piece, the tempo slips into high gear and the music becomes joyful, lively and danceable. There are several fun nods to Yanni’s earlier music in this one. “Missing You” is an expression of love - pure and simple! “Into the Storm” also playfully acknowledges Yanni’s influence. It begins as a quiet piano solo - the calm before - and then explodes with a high-energy swirling motion that will sweep you right into a chair. Fun! “Another Chance” turns more serious with a soulful piece about gratitude and how the devastating events in our lives can teach us to focus on what we have and love most.

Into the Blue is a very promising start for Michael Joseph and is available from Amazon, iTunes and CD Baby.
July 9, 2019
This review has been tagged as:
Debut AlbumsKathy's Picks
Michael's Website Michael's Artist Page on MainlyPiano
Album Links
Amazon (referral)iTunes
This site contains affiliate links to products. We may receive a commission for purchases made through these links.