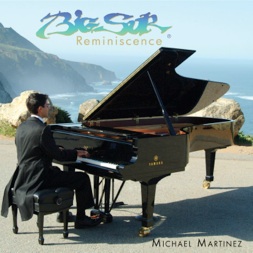 Michael's Website Michael's Artist Page on MainlyPiano
Album Links
Amazon (referral)iTunes
This site contains affiliate links to products. We may receive a commission for purchases made through these links.
Big Sur Reminiscence
Michael Martinez
2013 / Michael Martinez Music
46 minutes
Review by Kathy Parsons
Big Sur Reminiscence is the exciting first recording by Michael Martinez, a 23-year-old pianist/composer from the central California coast. Michael is the third very young artist I’ve reviewed recently (after Zachary Bruno and Paul Spaeth) and it does my piano teacher’s heart good to know that the wonders of the piano will continue to thrill with very capable younger hands. Big Sur Reminiscence is an exquisite collection of seven classic movie themes and pop songs and three original piano solos all played with spirit and aplomb that never overshadow the music. It’s obvious that Martinez has a breathtaking technique, but he also knows when to keep it simple and when to let ‘er rip. Martinez has been the Grand Piano Man for the Big Sur International Marathon since 2005, playing for the runners on the nine foot concert grand near the Bixby Bridge. The CD cover photo and a couple of photos inside were taken at that spectacular landmark.

The album begins with Mason Williams’ classic, “Classical Gas.” Martinez really makes this piece his own with powerful energy and lots of jazzy touches that should grab even the most jaded listener. I would imagine that “Chariots of Fire” is an annual favorite at the Marathon. While faithful to the original, Martinez plays this with a huge amount of passion and heart. Love it! The delicate “The Feather” from Forrest Gump is almost fragile at the beginning, building as it evolves but always tender and very sensitive. “Big Sur Prelude” is the first of the three originals and what a beauty it is! Flowing freely and sparkling at the same time, it was obviously inspired by the spectacular area it was named for. The title track is equally gorgeous. Smoother and more peaceful at the beginning, it gradually becomes more majestic, quiets, and then builds again - an incredible piece! John Barry’s theme from “Out of Africa” overflows with grace and understated emotion. “Scarborough Fair” has been a favorite song of mine for decades, and Martinez’s almost 6 1/2 minute arrangement is perfect. Flowing with heartfelt emotion, it’s one of the best versions I’ve heard. “Pacific Grove” is the third of Martinez’s originals. Named for his hometown near Monterey, the graceful melody and elegant performance paint a lovely picture. John Denver’s “Annie’s Song” is one of the most beautiful love songs ever written, and Martinez captures the love and wistful dreaminess of the song flawlessly. Leonard Cohen’s “Hallelujah” is another longtime favorite, and even without the lyrics, Martinez gets the point across. Sometimes very simple and sometimes fuller and more fleshed out, it’s a poignant close to a fantastic album.

Michael Martinez is off to an awesome start to his recording career, and I’m thrilled to help introduce him and his music to the world! Big Sur Reminiscence is available from michaelmartinezmusic.com, Amazon, iTunes, and CD Baby. I give it my highest recommendation! Bravo!!!
October 29, 2013
This review has been tagged as:
Debut AlbumsKathy's Favorites: 2013
Michael's Website Michael's Artist Page on MainlyPiano
Album Links
Amazon (referral)iTunes
This site contains affiliate links to products. We may receive a commission for purchases made through these links.
More reviews of Michael Martinez albums 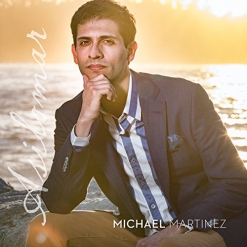