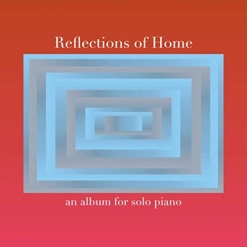 Michael's Website Michael's Artist Page on MainlyPiano
Album Links
Amazon (referral)Apple/iTunesSpotifySongbook Review
This site contains affiliate links to products. We may receive a commission for purchases made through these links.
Reflections of Home
Michael Mills
2020 / Tom's Creek Publishing
54 minutes
Review by Kathy Parsons
Reflections of Home is the debut solo piano album by pianist/composer/arranger Michael Mills. Still in his early-20's, Mills' music has been performed throughout the mid-Atlantic region of the US, on public radio, and across Europe. Growing up in a small town in southern West Virginia, Mills taught himself piano and composition until he started his undergraduate studies at Virginia Tech, earning a BA in Music Composition and Technology in 2019. It is refreshing to find a young artist who refuses to be boxed into any specific genres of music and who wants to reach beyond categories to find his true musical voice. With a college minor in Psychology, it is apparent that Mills is deeply interested in the human condition and life experiences, and that comes across vividly in his music. Mills founded Tom's Creek Publishing in early 2020 to publish his own work, but also has plans to expand the company to provide opportunities for other composers who are getting started and to those who are from underrepresented communities, to name a few long-range goals.

The nine original piano solos on Reflections of Home pay homage to the first pieces Mills composed, "the music that initially compelled me to pursue my dream." About half of the pieces are revised and expanded versions of his first compositions; the others are pieces he composed in honor of these "musical roots." Not surprisingly, the emotional range in the music is broad - from light and carefree to pensive to somewhat dark, yet the album holds together very well and provides a nice sampling of this young composer's early compositions.

Reflections of Home begins with "Fly," an exuberant bit of piano energy that dances all over the piano keyboard. A variety of musical themes are woven together to tell a story that "flies" freely, sometimes gliding and sometimes full speed ahead. "From Shadow" is a favorite. On the more mysterious side, it's a moderate waltz that ranges from a light and gentle touch to a more powerful expression - and sometimes rather abruptly! "Silent Adoration" is a much longer piece that beautifully conveys the deep emotions and longing of youth, freely exploring the soulful depths of the heart. "Today and Forever" is both joyful and passionate, ranging from strong and positive to very tender and delicate. "Never for Granted" feels very personal and much like a heartfelt promise or assurance to someone very close - another favorite. I love the intensity of "Past,"with its rolling broken chords on the left hand under an expressive melody on the right. Vivid emotions of sadness and loss communicate directly from one heart to another - definitely my favorite of the nine tracks! "Sincerity" is much lighter and livelier - almost a happy dance that swirls up and down the piano keyboard! I really like "When Tomorrow Comes," too, with its honesty and fervent conversational feeling. A mix of emotions are expressed in the music, keeping it consistently engaging. The last track, "Baby Blue," alternates between enthusiastic and upbeat and much quieter and more subdued, bringing the album to a whispered close.

Reflections of Home is an auspicious debut album from Michael Mills, and I'm very anxious to hear more of his music! The digital album is available for downloads and streaming at all the usual sites, including Michael's site and Amazon. Physical CDs can also be purchased at his site. A companion songbook is also available and is reviewed separately on MainlyPiano.com.
February 23, 2021
This review has been tagged as:
Debut Albums
Michael's Website Michael's Artist Page on MainlyPiano
Album Links
Amazon (referral)Apple/iTunesSpotifySongbook Review
This site contains affiliate links to products. We may receive a commission for purchases made through these links.