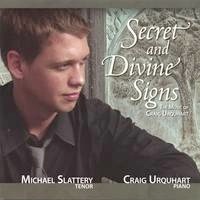 Michael's Website Michael's Artist Page on MainlyPiano Craig's Website Craig's Artist Page on MainlyPiano
Album Links
Amazon (referral)iTunes
This site contains affiliate links to products. We may receive a commission for purchases made through these links.
Secret and Divine Signs
Michael Slattery and Craig Urquhart
2006 / HeartEarth Music & Avie Records
53 minutes
Review by Kathy Parsons
I have been a fan of Craig Urquhart’s solo piano albums for quite some time. When we did an interview several years ago for Solo Piano Publications and my own “Pianotes” newsletter, he was obviously very passionate about his performances of “art songs” as well as his own solo work. These art songs are Urquhart’s original music set to the poetry that inspires the music. He says that as a composer, he writes the music with a certain type of performance in mind. When he heard tenor Michael Slattery sing Leonard Bernstein’s “Maria” at his European debut in Paris, Urquhart felt that he had finally found the perfect voice for his songs. Slattery was very familiar with Urquhart’s music, as his CDs were often passed around the hallways of Juilliard, where Slattery recently graduated. They began a collaboration in early 2005, and Slattery suggested that Urquhart intersperse some of his solo work between the songs to continue the mood or introduce a somewhat different tone. The inclusion of the solos was a brilliant idea that makes this CD unique in that it isn’t just solo piano or just vocal selections. Urquhart’s music tends to be very spare, elegant, and expressive, and Slattery mirrors that approach with his powerful but very sensitive voice. With the piano being the only accompaniment to the vocals, the pieces are more like duets. The poems that were set to music are by Walt Whitman (4), Emily Dickinson (6), Ron Draddy (1), D.H. Lawrence (1), and Hermann Hesse (1). The lyrics are in the liner notes, as are the words of both Michael Slattery and Craig Urquhart, and some biographical information. It’s a beautiful package and a fulfilling listening experience - over and over again.

Secret and Divine Signs is available from cdbaby.com. Recommended! More information can be found at craigurquhart.com and michaelslattery.com.
August 2, 2006
Michael's Website Michael's Artist Page on MainlyPiano Craig's Website Craig's Artist Page on MainlyPiano
Album Links
Amazon (referral)iTunes
This site contains affiliate links to products. We may receive a commission for purchases made through these links.