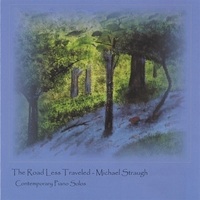 Michael's Website Michael's Artist Page on MainlyPiano
Album Links
Amazon (referral)iTunes
This site contains affiliate links to products. We may receive a commission for purchases made through these links.
The Road Less Traveled
Michael Straugh
2006 / Straugh House Publishing
54 minutes
Review by Kathy Parsons
The Road Less Traveled is the follow-up to pianist Michael Straugh’s 2004 debut, True North. The title was inspired by Robert Frost’s poem of the same name, which the artist found encouraging when he reached a fork in his own road of life several years ago. My main criticism of True North was the use of a non-acoustic piano, and that’s my only problem with this album, too. The music is strong, expressive, and original, but the piano sound has the metallic edge of an electronic instrument and the dynamics don’t vary much throughout the album. A non-pianist might not be able to hear this, but an experienced ear will pick up on the lack of subtle nuance very quickly and will miss the rich sonority of a good acoustic piano. The music itself is very enjoyable.

“Blush” opens the CD with a gentle confection full of sweet innocence. Calm and contented, it is a lovely way to begin. “Caela’s Song” has an aura of mystery about it and is a bit more intense. “Ekta” means “unity” in Hindi. One of my favorites on this album, this piece has a fluidity but also a lot of strength. The piece evolves into an Indian musical style halfway into the piece which is very effective on this piano, returning to the original theme to the end. The title track is very introspective - musical soul-searching - and is also a very effective piece. I really like “A Winter’s Tail,” which sparkles in the upper registers of the piano, suggesting a dance of light. “Beside You” is a sweet and reassuring love song. “Adagio” dates back to 1982, and is soothing and evocative. Slow and elegant, this very beautiful piece leisurely unfolds and reveals itself, using a variety of themes that dovetail into each other, creating a cohesive whole. “All Roads Lead Home” is a lovely exploration. Sometimes warm and contented, sometimes a bit more agitated with a sense of urgency, the piece goes through quite an evolution, ending the album with kind of an open-ended question.

The music on The Road Less Traveled is solid and well-crafted, and a good grand piano would have made the CD even better. It is available from cdbaby.com.
September 26, 2006
Michael's Website Michael's Artist Page on MainlyPiano
Album Links
Amazon (referral)iTunes
This site contains affiliate links to products. We may receive a commission for purchases made through these links.
More reviews of Michael Straugh albums 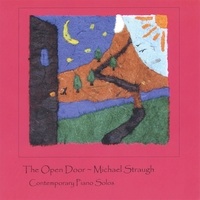 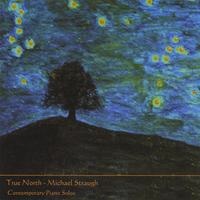