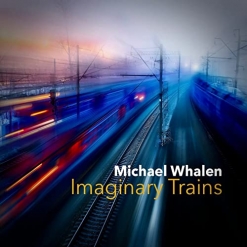 Michael's Website Michael's Artist Page on MainlyPiano
Album Links
Amazon (referral)BandcampApple/iTunesAcross The World videoDistance videoSpotify
This site contains affiliate links to products. We may receive a commission for purchases made through these links.
Imaginary Trains
Michael Whalen
2022 / Spout/MWM
55 minutes
Review by Kathy Parsons
Imaginary Trains is the 38th solo album from artist/extraordinaire Michael Whalen. There really isn't much in the music industry that the two-time Emmy-award winner hasn't done. From his dozens of solo albums of original music to the music for hundreds of televisions shows, dozens of films, thousands of international advertisements and video games to production and playing on hundreds of other artists recordings, he has literally done it all!

Quoting Michael Whalen: "This new album is about letting my all of my electronic influences out for everyone to see!...Since I completed my album Sacred Spaces in 2019, my evolution as an artist, synthesist and sound designer has made it essential to create a whole new collection of sounds for EVERY new album I produce. It’s a huge job but the music deserves its own unique voice – not sounds that I used before. For about a year, I have been experimenting with thousands of new sounds and I finally came up with a group of about 200 sounds that are the basis of Imaginary Trains. On this new project, I threw myself headlong back into the electronic music that excited and inspired me when I first started as a composer." Whalen composed, arranged, performed, produced and mixed all of the music on the album except "Distance," which was co-composed with Donna Lewis.

Some electronic music can be cold and unemotional, but Imaginary Trains - or any of Whalen's music - is anything BUT that. Some of the eleven tracks are very ambient and others are more rhythmic and melodic, and the sound quality on all of them is extraordinary. I found it interesting that Whalen named all of the pieces before composing any of the music. "I love framing every song with a narrative, character or a place. Imaginary Trains is about taking the listener on a journey of the heart and the mind. But before I transport anyone, I have to take the journey myself.” Makes sense!

Imaginary Trains begins with the title track, a mostly ambient piece with a big, cinematic sweep. While the piece moves slowly with broad strokes of musical color, there is an underlying rhythm that bubbles up to the surface, giving the piece a subtle and intriguing energy. "Against the Sky" has a slow, graceful rhythm and is just a bit mysterious. "Across the World to Be With You" features Grammy winner Ricky Kej and also has a spectacular video on YouTube. "My Immortal Beloved" has a light, dreamy and magical touch that is soooo soothing - a love song that floats on a cloud! "Vox Humana" is a favorite with its quirky voices, catchy rhythms, and dance-floor energy. Both fun and compelling, there is a lot going on in this piece, but never too much. Great stuff! "The Ribbon of Time" also has a very imaginative music video with images that gracefully flow to the music - including the images of Michael! "The Journey To LightsEdge" is my favorite track on the album. Both deeply expressive and very visual, it provides a musical journey into your imagination With a playing time of just under 8 minutes, the music has plenty of time to draw you in, but don't expect it to let go! I really love this one! "Distance" is a dreamy, ethereal song co-composed with Donna Lewis and also has a music video - a great ending to a fantastic album!

Imaginary Trains is available from Amazon, Bandcamp, and Apple Music/iTunes. It is also available on all of the streaming sites. A portion of the proceeds from this recording go to the Bob Moog Foundation (Michael is on the Board of Directors). Imaginary Trains is VERY highly recommended!

April 15, 2022
This review has been tagged as:
Latest Reviews
Michael's Website Michael's Artist Page on MainlyPiano
Album Links
Amazon (referral)BandcampApple/iTunesAcross The World videoDistance videoSpotify
This site contains affiliate links to products. We may receive a commission for purchases made through these links.
More reviews of Michael Whalen albums 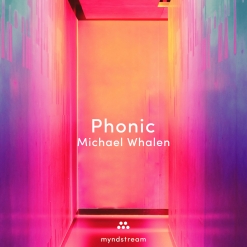 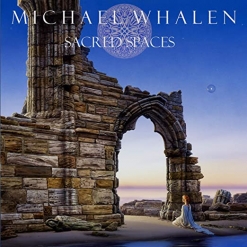