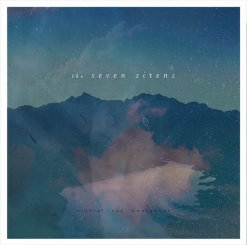 Michiel's Website Michiel's Artist Page on MainlyPiano Blue Spiral Records' Website Blue Spiral Records' Artist Page on MainlyPiano
Album Links
Blue Spiral RecordsAmazon (referral)Apple/iTunesSpotify
This site contains affiliate links to products. We may receive a commission for purchases made through these links.
The Seven Sirens
Michiel van Poelgeest and Blue Spiral Records
2021 / Blue Spiral Records
21 minutes
Review by Kathy Parsons
The Seven Sirens is a fascinating album from Dutch composer Michiel van Poelgeest and is his first release on the Blue Spiral Records label. The music was inspired by the Greek myths that van Poelgeest often hears his wife telling their children, so the instrumentation and moods of the seven tracks are varied, dramatic and sometimes otherworldly. Using a combination of felted piano, orchestral keyboard elements and ambient textures, van Poelgeest creates vivid scenes and images that come to life in the listener's imagination. Christophe Luciani plays cello on some of the tracks, adding a very haunting quality to the music. Also a film and television composer, van Poelgeest previously released two albums under the name of Villeneuf. This quote explains his approach to his music: "For each project my goal is the same: to make the intangible audible." I don't think I can name any favorites from this album - all seven tracks are excellent, beautifully-recorded and very vivid.

The Seven Sirens begins with "Wreckage," a piece that begins as a simple, mysterious felted piano solo and then layers in strings as well as other atmospheric sounds. The feeling is dark, but the sounds from the higher octaves of the piano keep it from becoming bleak or tragic - a very effective opener! "Wreckage" is also available as a single. "Arachne" is more ambient and includes felted piano and various keyboard/synth sounds. It starts out mysteriously and darkens considerably as it evolves, depicting a scene that is not a happy place to be before quieting and fading out at the end. "Mnemosyne" refers to the Greek Goddess of Memory and Remembrance who was also the mother of the nine muses. Luciani's cello adds a feeling of mournfulness to this gorgeous and very emotional piece. "Daybright" is much lighter and more optimistic. The felted piano is played mostly in the upper octaves of the piano keyboard with string washes and other atmospheric sounds shimmering behind it. "Chaos" has a very dark, other-worldly feeling that really draws you in as you try to figure out what's going on. Much of the piece has a rhythm that sounds like a heart beating in the midst of the desolation of whatever has occurred - very visual and compelling! "Phaeton" returns to a more ambient style with felted piano and layers of keyboard sounds and rhythms. "Sirens" closes the album telling the story of the half-bird/half maidens who lured sailors to their deaths on the rocks with their enchanting songs and voices. Very ominous and powerful, this short piece casts a spell of its own!