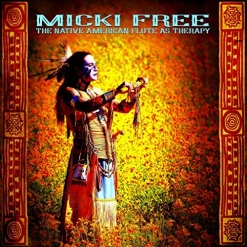 Micki's Website Micki's Artist Page on MainlyPiano
Album Links
Amazon (referral)iTunes
This site contains affiliate links to products. We may receive a commission for purchases made through these links.
The Native American Flute as Therapy
Micki Free
2016 / Mysterium Music
93 minutes
Review by Kathy Parsons
The Native American Flute as Therapy is a fascinating three-disc set by Micki Free. All eleven tracks on Discs 1 and 2 are original spoken word lyrics and introductions followed by music; only “Down By the River” has vocals. Disc 3 is a five-minute video of “Lavender Kiss,” a tribute to Free’s longtime friend, Prince. The Grammy Award winning Free has had a long and illustrious career as a rocker, but he has also produced several albums of Native American flute music. Part Comanche and part Cherokee (as well as several other cultural heritages), Free is also the recipient of five Native American Music Awards. All of the music on this album was written by Free except for his cover of Neil Young’s “Down By the River.” Brother Paul and April Brown (Minstrel Streams) also appear on the recording and collaborated with Free on four of the tracks. Paul Brown appears on Hammond B3 organ and Fender Rhodes Suitcase piano, and April plays a Native American flute duet and provides background vocals on “Down By the River.” Otherwise, Free provides all lead and background vocals, flutes, guitars and percussion. Although Paul Brown’s Hammond organ stays pretty much in the background, it’s a fascinating addition to the Native flute, adding a taste of blues and rock that works seamlessly with the flute.

The spoken word introductions to the instrumental music are hypnotic and poetic, conjuring up peaceful, healing images, and calling for positive light and energy as well as for letting go of all negativity. Free also talks about the healing powers of water, candles, essential oils, the pressure points in the feet, plants, and positive energy. The three discs are packaged along with an eight-page booklet in a colorful six-panel digipak. A transcription of all of the spoken words is included in the booklet.

There is a bonus track at the end of Disc 2 titled “Heartbeat Meditation Yoga.” On this track, the introductory words are the same as track 4 followed by the sound of deep breathing, drum and light chimes. I don’t recommend listening to this one while driving, as it is very hypnotic and continues for a little more than 7 1/2 minutes.

The video of “Lavender Kiss” often refers to Prince and shows Free playing both flute and acoustic guitar. In some of it, he is on a tour bus, and sometimes he is playing his music outside. It is not a flashy video, but it’s very effective and a loving tribute to a friend who died too soon.

The Native American Flute as Therapy is an ambitious project from an amazing musician. It is very different from most of the music I review, but I highly recommend it! It is available from Amazon and iTunes. Check it out!
January 15, 2017
This review has been tagged as:
Kathy's PicksOther Solo Instruments
Micki's Website Micki's Artist Page on MainlyPiano
Album Links
Amazon (referral)iTunes
This site contains affiliate links to products. We may receive a commission for purchases made through these links.