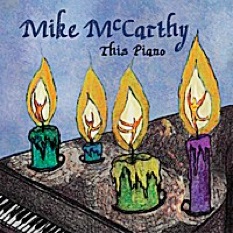 Mike's Website Mike's Artist Page on MainlyPiano
Album Links
Amazon (referral)iTunes
This site contains affiliate links to products. We may receive a commission for purchases made through these links.
This Piano
Mike McCarthy
2012 / Hear & There Music
65 minutes
Review by Kathy Parsons
This Piano is pianist/composer Mike McCarthy’s first “official” CD, although he has self-produced five other albums over the past seven years. McCarthy started writing music at about the same time he asked his parents for piano lessons at the age of six, and his passion for creating his own music has grown ever stronger over the years. This Piano is intended to be an introduction to McCarthy’s music, and the fourteen tracks are varied in mood and in style. Sometimes smooth and serene and sometimes bigger and more powerful, McCarthy’s versatility and playing chops are impressive! During his years performing in bands, Mike strove to create unique chord progressions that would bring something different to the music but would still be appealing - an approach he also uses when composing for the piano. This gives the music a bit of an edge that will most likely be better enjoyed with active listening rather than for relaxation.

This Piano begins with “An Open,” a piece as mysterious as its title. Played in a free-form style that suggests extensive improvisation, it’s an intriguing start. “Apart” is more melodic and poignant with a touch of keyboard in the background. “The Peasant” is one of my favorites. Very dark and foreboding, I’d love to know the story behind this piece. I also really like “All The Things,” which includes some keyboard plucked strings in the background that enhance the dark, sometimes tragic mood. Some of the passages are actually quite light, making this a story/piece that unfolds as it goes along. “Unbreakable” is a gospel-tinged ballad that suggests strength and sincerity. “The Last Night” is my favorite track. Very slow and leisurely, the mood is dark, but more of a night-time dark rather than a depressive funk. As it builds, the piece becomes very passionate and then settles back into stillness. “More Than” seems to be a deeply personal soliloquy, allowing thoughts and feelings to flow spontaneously, examining some and letting others go. The freedom of the music again suggests extensive improvisation and of being in the moment. “Amethyst” is another favorite and the closing track. Passionate and dramatic, some passages are very soft and soothing while others crank up the volume and the emotional impact.

Mike McCarthy’s “getting acquainted” debut is quite an impressive introduction to his music. It is available from mikemccarthypiano.com, Amazon, iTunes, and CD Baby. Recommended if you are looking for something a little different.
October 29, 2012
This review has been tagged as:
Debut Albums
Mike's Website Mike's Artist Page on MainlyPiano
Album Links
Amazon (referral)iTunes
This site contains affiliate links to products. We may receive a commission for purchases made through these links.
More reviews of Mike McCarthy albums 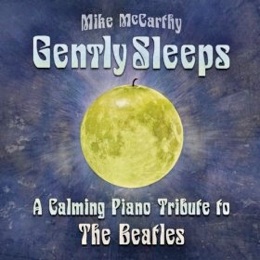