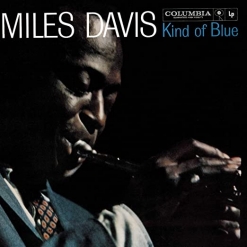 Miles' Website Miles' Artist Page on MainlyPiano
Album Links
Amazon (referral)Apple/iTunesApple/iTunesSpotify
This site contains affiliate links to products. We may receive a commission for purchases made through these links.
Kind of Blue
Miles Davis
1959 / Columbia
46 minutes
Review by Steve Yip
Kind of Blue is one of the all-time great musical works of the modern era! I think most people know the name, Miles Davis. Especially if you are somewhat into music because Miles, while mainly seen as a “jazz” musician, he was an innovator in several musical modalities (Kathy Parsons should school me about ‘modalities’ in music) in its changes and evolutions. Do your research and going forward you will find that Miles’ music began to fuse with classical, rock, Spanish folk, and other traditions.

Yes, I am sort of old school musically. So I want to share the gift that is Kind of Blue. I cannot remember how I was first compelled to purchase this back in the mid-80s, but I do know that constantly running into its mellow, constructive grooves came by way of the jazz music station WBGO-FM. Back in the day, before the problem of falling asleep after dinner, I would be reading and doing some writing. Almost always, I would choose Kind of Blue to provide the background music. But that doesn’t mean that Kind of Blue, or many others of Miles’ body of work, should be delegated to the easy listening channels. Every single number in this work is a recognizable signature piece in its own right that represents in so many settings. Oh yeah, that’s a Miles Davis.

“So What” captures Miles’ blunt personality in its title, but it grooves in a mellow, upbeat way. It begins almost quietly with a tinkling of the keys, and it builds towards a gentle swing with bass fiddle, snare drums, before Miles’ trumpet comes in with piano behind things keeping a firm rhythm. And then it closes quietly.

This is followed by the cool, blues-oriented “Freddie Freeloader,” with pianist Wynton Kelly in place of Bill Evans (not to be confused with Gil Evans). "Blue in Green" and "All Blues" are cool contemplative pieces. "Flamenco Sketches" provides the quiet closing of the album. You might have thought ‘flamenco’ may be something lively and upbeat, but surprisingly, no.

Kind of Blue was released in 1959! In this recording, Miles deployed John Coltrane and Julian "Cannonball" Adderley on sax, pianists Bill Evans and Wynton Kelly, bassist Paul Chambers, and drummer Jimmy Cobb. Today these names are among the celebrated in the history of the jazz world. Subsequent reissues in 1998 and 2008 offer bonus tracks. Play and pay attention to this seminal work; you will find its deep cerebral enhancing qualities wash over you!

The poet Quincy Troupe, Miles’ biographer and friend, said that Miles Davis is an “unreconstructed Black man” who is not just a great artist, but one of the great musical innovators of all time. So if you do not follow Miles’ music, this may be a good introduction to appreciate as he evolved from his hard bop origins. In goes without saying that many readers of MainlyPiano.com are already familiar and/or possess Miles Davis’ albums. For those who are being introduced, Kind of Blue should be one of your nodal points in musical explorations. You don’t have to be a jazz purist to uphold and share this music.

To learn more about Miles Davis, start with the Netflix documentary “Miles Davis: Birth of the Cool” and Quincy Troupe’s “Miles: The Autobiography”.

February 12, 2022
This review has been tagged as:
Jazz
Miles' Website Miles' Artist Page on MainlyPiano
Album Links
Amazon (referral)Apple/iTunesApple/iTunesSpotify
This site contains affiliate links to products. We may receive a commission for purchases made through these links.