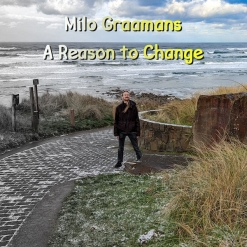 Milo's Website Milo's Artist Page on MainlyPiano
Album Links
Amazon (referral)Apple/iTunesSpotify
This site contains affiliate links to products. We may receive a commission for purchases made through these links.
A Reason To Change
Milo Graamans
2022 / Milo Graamans
56 minutes
Review by Kathy Parsons
A Reason To Change is a collection of fourteen songs composed and recorded by Milo Graamans, an artist from the Oregon Coast that I met around 12 years ago when David Lanz played several house concerts here. Milo was still a teenager then, but I soon learned that he was an aspiring pianist/composer/ songwriter. Long story short, Milo performed several concerts here before the pandemic shut everything down and I was blown away by how easily he moves from his own songs as singer/songwriter/pianist to ragtime to an impressive repertoire of classical music. Milo has released several albums, written and had produced a musical (She Loves Me Not), is the choir director and organist at his church, and many other musical pursuits. He started studying piano at the age of 4 and was enrolled at The University of Oregon School of Music from 2011-12 (he dropped out to complete his musical). It's been a joy to watch Milo grow up and to see his musical career evolving!

Most of the recordings I review are instrumental, but all fourteen tracks on A Reason To Change are original vocals with piano and other instruments. Back-up musicians include Ian Smith (vocals, acoustic and electric guitar), Stacy Smith (vocals), John Bringetto (trumpet), Cameron Locklear (bass guitar), Ellis Lampman (drums and percussion), Mindy Simon (violin) and Adrienne Welsh (cello). Milo's songs are always very personal and heartfelt, and quite a few of the songs on this album reflect the joy and deep emotion of his recent marriage. His wife, Lauralee Norris Graamans, wrote the lyrics for one song and sings on another, making this a very personal project.

A Reason To Change begins with "When It Was Green," a cheerful ode to nature and the environment. For "Love Is," Milo wrote the music and his wife, Lauralee, wrote the lyrics which describe some of the many aspects of love. "Willow" is a song with music by Milo and lyrics by none other than William Shakespeare (from Hamlet and Othello). Piano, violin and cello are the instrumentation. "Unprepared" tells a cautionary tale of not being ready for any of the crises that could be lurking around the corner at any time. "Falling Into Autumn" is just Milo singing a sweet love song and playing the piano. "Best Day of My Life" is a song that depicts the wide mood swings that come with depression, going from almost euphoric to lower than low and back again - a very powerful and vivid message! "Respect Your Truth" is a loving duet with Milo and Lauralee accompanied by piano and bass guitar. "Not Your Soulmate" and "Thrown Together" are about relationships not working out and the emotional pain that causes. "Scary Jerry" is a bluesy romp and one of my favorite tracks. Piano, trumpet, bass guitar and drums create a toe-tapper about the worst kind of guy you could ever know - with a smile! "For the Better" brings the album to a close with a sweet and ardent love song for Milo's wife - joyful and sincere!

A Reason To Change is available to download or stream from Amazon, Apple Music/iTunes and Spotify (and other streaming sites), and CDs are available from Milo's site. Get acquainted with an artist on the rise!

August 19, 2022
This review has been tagged as:
Latest Reviews
Milo's Website Milo's Artist Page on MainlyPiano
Album Links
Amazon (referral)Apple/iTunesSpotify
This site contains affiliate links to products. We may receive a commission for purchases made through these links.